GRAIGUECULLEN made light of the poor weather conditions and of their final opponents to capture the junior ‘C’ football title in O’Moore Park on Wednesday evening.
From the start the Barrowsiders controlled affairs building up a lead that Colt could never rail in despite their best efforts. Credit to the Colt lads they never threw in the towel but they had no answer to Graiguecullen’s firepower.
Colm Doran was on fire on the night accounting for two goals and six points and he was strongly supported by Peter Branagan with two goals, while Ricky Lawler and John O’Neill accounted for one each amounting to and incredible six over the course of the game.
Colm Doran opened the scoring with a point from a free which Michael Grant quickly cancelled out. And when Nathan Dunne converted a free 13 minutes in Colt actually had the lead. But that did not last long.
Soon after when Graiguecullen’s Patrick Murphy was fouled in the square referee Vincent Dowling immediately pointed to the spot. Peter Brannigan took the responsibility and confidently dispatched the ball to the bottom left corner. 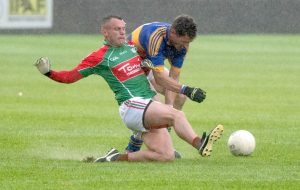 Graiguecullen were back in front and would never relinquish the lead despite Robert Delaney pulling a point back which Padraig Murphy cancelled out.
With the opening half drawing to a close Graiguecullen hit a purple patch in the space of five minutes. Doran raised the green flag when he got on the end of John O’Neill’s cross to rattle the net. He then added a free with Alan Malone scoring from play leaving Graiguecullen leading 2-5 to 0-3 at half time.
Within 20 seconds of the restart half time substitute Barry Regan pointed while another Doran free had Graiguecullen powering towards the title.
Robert Delaney pulled back for Colt but this had little effect, doing nothing to deter Graiguecullen especially when John O’Neill replied with a goal from out close to the 45 metre line.
To their credit Colt kept battling, never conceding defeat and they had something to cheer about when Padraig Dunne found the roof of the Graiguecullen net.
But once again Graiguecullen responded positively. Liam Byrne’s quick free found Doran who split the posts. Ricky Lawler then pointed before Doran scored his second goal and Graiguecullen’s fourth.
Ivan Ryan sent over a point for Colt but the Graiguecullen machine marched relentlessly on. Lawlor struck foe their fifth goal while Peter Branagan added a sixth to round off a great evening for the Barrowsiders.