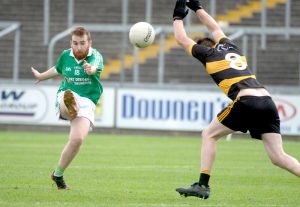 STRADBALLY can breathe easy for another 12 months having seen off The Heath n O’Moore Park on Sunday. It would have been unthinkable for the Little Town’s supporters that they might have had to cheer on a intermediate team next year, but they have a lot of work to do if they are not to find themselves in a similar position next year.
The Heath have found themselves in this position a few times in the recent past and will have to shake things up if they hope to get the better of Crettyard in the relegation final.
The opening 30 minutes were fairly lively with both sides popping over some decent points. Chris Bergin got the scoring up and running with a brace of frees to hand The Heath the early initiative.
The sides however were level soon after with Jack Deegan landing an excellent points from play and Jody Dillon converting a 35 metre free.
The Heath stormed back to shoot the next three points, Daithí Carroll rounding off a good move, Chris Bergin on target from all of 45 metres and Carroll again in the 12th minute.
Now it was Stradbally’s turn to take up the reins and three points from Jody Dillon, two frees, had the sides locked together again in the 19th minute. And that was how it remained after Chris Bergin (free) and Justin swapped points.
With five minutes remaining in the half The Heath were back in front thanks to a superb point from Daithí Carroll but it didn’t stay that way for long.
Two minutes later Colm Begley drilled a perfect pas into Benny Lawlor in the tight corner. He cut back inside two defenders before drilling the ball to the far bottom corner.
The Heath then had a golden opportunity of a goal when Chris Bergin worked hard to get a pass through to Evan Keane but he shot straight at the keeper.
The result should have been put beyond doubt a minute later when Ciaran Booth was very harshly judged to have fouled Darren Maher and a penalty awarded. Justice seemed done when Dillon chipped the boll over the bar from the spot but that still left Stradbally leading 1-7 to 0-7 at the break.
The second half too had its moments but The Heath never looked like closing the gap. It was very much tit for tat the whole way through the half.
In the opening five minutes points from Evin Keane and Andrew Booth were matched by brace of Tom Shiel points, one a free. Over the next ten minutes Chris Bergin and Jody Dillon exchanged frees. It was the same over the net ten minutes with Ciaran Booth and Shiel pointing for their respective sides and once Shiel converted yet another free in the 53rd minute there was only going to be one winner.
On the hour mark Benny Lawlor put five between the sides and three minutes later Dylan Kavanagh scored The Heath’s first point in 20 minutes. Six minutes into injury time Dillon landed the last score of the game from a free and Stradbally have lived to fight another senior championship.