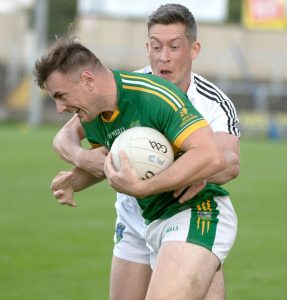 TWO years after their last county final appearance Ballylinan are back in the hunt for a first ever senior crown. Courtwood were crowned intermediate champions last year and like Ballylinan they were hunting a first senior crown. Neither might be on the short list for glory but that would not worry either at this stage.
Court wood’s finest hour at this level was in 1976 but then, as now, Portlaoise were the kingpins and having disposed of the All Whites they went on to add the provincial crown as well.
On Saturday Courtwood began with the form that saw them reach the league final before losing to Saturday’s opponents. Portlaoise had knocked them out of the winners race and had also beaten Ballylinan but that went out the door as soon as the ball was thrown in.
Courtwood went on two attacks both finishing on the outside of the upright. Alan Kinsella became the first Courtwood player to score in senior knock out for many years but two minutes later Gary Walsh marked his return to Irish soil with the equaliser. He looked a bit tentative but that would all change before the full time whistle sounded.
Courtwood went back in front after a move started by Niall Donogher and finished by Niall Dunne. After Ballylinan missed a couple of opportunities Niall Dunne kicked two more in a row.
The two sides were guilty of missing scoring chances before Dunne put three between the teams with 19 minutes on the clock. Niall Donogher then put his name on the score sheet as the All Whites were in total control.
Ballylinan withdrew veteran John Kealy bringing on Ciaran Fennessey but then came a great score by Courtwood. Alan Kinsella fed Cian Doyle who found Sean Flynn ghosting into the square where he knocked in a great goal. Niall Dunne then converted a free leaving the Kildare border side trailing by eight points.
Gary Walsh settled them with two frees and, after introducing Larry Kealy, he brought the Ballylinan tally to four. After Dan Luttrell denied Ballylinan a goal Richie Ryan followed up with a good point from play.
Ballylinan were improving but trailed 0-5 to 1-7 at the interval and their manager Niall Carew was hardly pleased.
Gary Walsh opened the second half scoring from a free and when Niall Donogher opened his side’s account the margin was a goal. Then after a great Ballylinan move down field the ball reached Gary Walsh and he looked up for support. There running all alone was Oisin Leonard and he met the ball head high and banged it into Matthew Byron’s net, almost a carbon copy of the Courtwood goal and the new half only five minutes old.
The signs were ominous now for Courtwood but Niall Dunne calmed nerves with a point from a free. The next score would be crucial and who better than Gary Walsh with a spectacular effort and only one separated the sides.
Experience would be vital now and when Ciaran Farrell swung over two points in as many minutes Courtwood trailed for the first time in the game with 12 minutes remaining.
Niall Dunne made no mistake from a free but, after a foul on Cathal Dunne, Gary Walsh added to his haul with eight minutes remaining. Then came a black card for Cathal Fennessey but Dermot Leonard was a good replacement.
Two minutes later another black card for Ballylinan, this one for Larry Kealy who had worked hard. Ballylinan now introduced the experienced Robbie Donogher and he swept up a lot of dangerous balls.
Gary Walsh took a pass from Cathal Dunne to put two between the sides before he then kicked over an outrageous effort to put three between the sides with three minutes remaining.
Courtwood were unable to close down Walsh but suddenly against the run of play Dave Duffy, only on the field three minutes, swung his fist at a bouncing ball and beat the Ballylinan keeper to a tremendous round of applause.
However, within 30 seconds the umpire at the other end was signalling point 10 for Walsh. Courtwood won a free from the kick out and Alan Kinsella ensured parity and the clock was on the 60 minute mark.
A draw looked on the cards but the man who was kicking Stateside a week earlier managed to get possession and with one look split the posts with number 11. Courtwood still had time but hit two wides although the second one by Conor Hogan was debatable but time ran out.
Now Ballylinan advance to meet neighbours Killeshin in three week’s time.
Courtwood had a wonderful two years but they were devastated having surrendered an eight point advantage but inexperience and of course the best scoring performance this year by Walsh proved a bridge too far for a very young team.