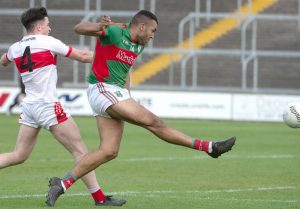 EMO will look back o this game as the one that got away. They had more than their fair share of possession but failed miserably to make full use of it.
In contrast Graigue enjoyed the lesser possession but when they got into scoring positions they were far more accurate in their shooting.
All in all this was a game that did little to stir the spirits of those in O’Moore Park on Sunday. While the first half was interesting enough with little to choose between the sides, the second half became a tedious affair. Five scores in the third quarter did little to lift the gloominess, and with just another six scores in the final quarter, it all became very staid.
Emo got off to the better start building up a three point lead inside the opening six minutes, James Hilliard, Darren Strong (free) and Paul Lawlor (free) on target.
Graiguecullen came back with a flourish. A Jamie Parr free got them off the mark while two excellent points from Mark Timmons had the sides level 12 minutes in.
Graiguecullen got a major boost five minutes later after a goal-bound shot from Timmons was blocked on the line. As he ball bobbled around in the square Ross Hennessy was on hand to force it to the net.
Now it was Emo’s turn to respond and they did so positively. Points from Padraig Kirwan, Paul Lawlor (free) and a beauty from Darren Strong had the sides tied after 22 minutes.
However a brace of points from Jamie Parr frees had Graiguecullen back in the driving seat, but only briefly. A diagonal Finbarr Crowley pass into the Graiguecullen goalmouth was gathered by Stephen Norton. He skipped past a defender and drove to the bottom corner to edge his side back in front by one.
That was it stood at the break after Darren Strong and Brian Byrne swapped points, Emo leading 1-7 to 1-6 at the break.
Another Jamie Parr free just after the restart levelled affairs and Graiguecullen were back in front four minutes in thanks to a Ross Hennessy point.
Within eight minutes Emo were back in front thanks to points from Jack Owes and another Strong free. That free came about after Chris Hurley was black carded and had to be replaced by Danny Doogue, and the veteran would play a part in his side’s advance to the quarter-finals.
Mark Timmons levelled the game as we entered the final quarter and from here to the end it was all about the Barrowsiders as the Emo challenge crumbled.
A Brian Byrne free edged them back in front in the 48th minute and between that and the end they were t land four more points, two from Danny Doogue, one a free, Luke Alysbury from play and goalkeeper Danny Bolger with a free. Emo’s only score in this period was a pointed free by Darren Strong.
Emo will be bitterly disappointed at how their game collapsed in the final quarter when they were still very much in the hunt for a quarter-final place.
In contrast Graiguecullen will be delighted to have advanced to the last eight where they have been drawn against Portarlington in what promises to be an intriguing game.