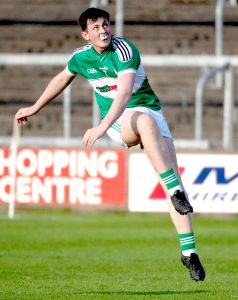 THIS all began in 1991 when Oola, Co. Limerick native Dick Quillinan led Ballyfin to junior ‘B’ success beating Crettyard. On Saturday last when Ballyfin looked in trouble Killian Fitzpatrick sprung Ricky Quillinan from the bench and he steadied the ship as the boys in green went on to reach a first ever knock out spot.
Having lost to Graiguecullen, Ballyfin bounced back putting Crettyard to the sword but when drawn against Arles Killeen they knew this would be a step up, but it did not faze them in the least.
Ballyfin were wide on their first attack but at the other end Donie Kingston set up Sean O’Shea for the game’s opening score after two minutes. From the kick out defender Allan Connolly fed James Finn who found Sean Moore. He slipped his marker and slammed the ball past Mick Leigh for the game’s opening goal.
Midfielder Darragh Connolly went on a run before kicking Ballyfin’s first point and even at this stage Ballyfin looked threatening. But the Kingston brothers calmed matters, both kicking points and Donie saw a rasping shot rebound off the upright in the ninth minute.
Paul kicked the equaliser but bizarrely Ballyfin were caught off guard a minute later. Donie Kingston could hardly believe his luck when the ball fell in front of him and with no Ballyfin defender in sight he slid the ball into the net from five metres.
Ballyfin recovered but hit a bad wide before Sean Moore struck for his second goal and added a brace of points.
Killeen hit a purple patch, Donie Kingston leading the way with a brace and Conor Keightley added a great point to edge the magpies in front at the end of an exhilarating opening quarter. Ballyfin responded with white flags from Darragh Connolly and James Moore but Keightley added his second leaving matters all square again.
The closing ten minutes produced seven more scores as both sides were intent on free flowing football. James Moore and Darragh Connolly added two in a row, Donie Kingston and Sean Moore exchanged points and it fell to Donie Kingston to narrow the gap to a single point with two minutes of normal time remaining.
Ballyfin would have been happy enough going in ahead by one. However this green machine are no ordinary team and if there was some soft goals at either end the next was in that category too. Sean Moore was on a hat trick but unselfishly slid the ball across to full forward Louis Duff who had time to look up and poke the leather across the line.
To round off an extraordinary half hour’s scoring Jack Priestly caught the kick out and split the posts sending the teams to the dressing rooms looking up at the scoreboard reading 3-9 to 1-10, 23 scores in half an hour is not bad in football.
Arles Killeen are used to these occasions and despite being out played only five points separated the teams. With their experience Killeen were still in contention and the appearance of Donie Brennan on the resumption was a lift while James Mahon also came on.
Donie would open the scoring after two minutes from a free but if Killeen thought that Ballyfin might retreat and defend their lead they were wrong. Within three minutes the net was bulging again this time it was the man wearing 15, Jack Priestly. Not a name associated with Ballyfin and not long out of school, he rifled the ball past the keeper and then caught the kick out and returned it between the uprights.
Louis Duff made it nine points separating the sides but suddenly Killeen went on a spree that yielded two goals and two points. First Donie Kingston was on target from a free followed by Sean O’Shea from play. Paul Kingston saw an effort rebound off the upright but a minute later he was on target for a great goal. A minute and a half later a superb effort by Donie Kingston and the net was shaking at the Town end to the delight of Killeen supporters.
Ballyfin had introduced Ricky Quillinan and with height advantage he caught some great ball in defence. Had Ballyfin shot their bolt with 15 minutes remaining? Not at all. Midfielder James Finn, back from Dubai, landed a magnificent point and James Moore struck his third point from play to settle the nerves.
A Sean Moore effort for goal was denied by the keeper at the expense of a 45 and again James Finn nailed it, followed by two more white flags by James Moore and Louis Duff.
Killeen still had hope but Ballyfin were playing with a swagger and when Jack Priestly got inside the defence in the 59th minute he brought his tally to 2-2 with a blistering shot. The unfortunate Mick Leigh, only returning from suspension, must have wished he was still suspended.
The full time whistle sounded but Ballyfin were not getting carried away. This was not their biggest ever winning margin, that was when the caused their last big upset winning the intermediate championship five years ago when they had 11 points to spare over Timahoe.
Next up are last year’s beaten finalists O’Dempsey’s who will be favourites but they only retuned to senior grade three years ago also beating Timahoe.
This win apart from the perceived upset marked the real beginning of this year’s championship proving there is no substitute for knock out competition. If the Moore brothers were brilliant then the Kingstons shaded the scoring with 3-9 between them to the Moore’s 2-7.
For Ballyfin this was surely their finest hour since George Lanham scored 3-9 in the senior hurling semi-final in 1972 beating Rathdowney.