A LAOIS woman said that she was caught up in what she described as a ‘frightening crowd crush’ at last weekend’s Electric Picnic festival.

The woman said that, along with her son, they had attended the American pop star Billie Eilish concert in the main arena on Friday evening.

She took up the story: “There was a massive crowd in the arena. When Billie Eilish finished her set, there was, like, an almost immediate rush of people trying to get out of the area all at the same time. I saw people pushing, shoving and heaving against each other. I saw an elderly woman, I’d say in her 60s, fall and people walking on her. A man managed to get her to her feet. She was very shook-looking. I saw another young girl fall. Her mother managed to get her back up on her feet quickly. Myself and my son were just pushed along like a wave by the surge of the crowd. It was a very frightening crowd crush.” 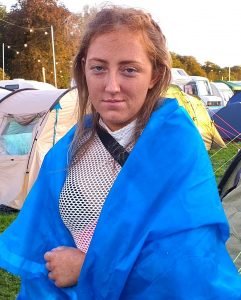 Sinead Kealy who had to receive first aid treatment during last weekend’s Electric Picnic festival after been stretchers to a first aid tent following the Billy Eilish concert in the main arena.

Sinead Kealy from Cork spoke of how frightened she was after been knocked over by the crowd exiting the main arena.

Ms Kealy said: “It was like a stampede. People just turned and were pushing their way out. I was pushed and got knocked over. I couldn’t get up. People were just walking all over me. All I could see were people’s feet standing and stamping on me. My boyfriend managed to pull me up and took me inside a crowd control barrier.

“He went out to try and get a buggy to bring me to a first aid station. I was lying on the ground in severe pain for about 15 minutes before a buggy came and stretchered me to the first aid tent. When I was there, they told me I had injured my elbow, gave me three tablets, a blue wrap and said I should be all right to go back to my tent.

“While I was being treated in the tent by the Red Cross, quite a lot of other people were being brought in on stretchers for attention to their ankles, legs and arms following the incident in the main arena.”

Replying to the claims put to him by the Laois Nationalist, managing director of Festival Republic Melvin Benn denied that there were any crowd control problems in the main arena at the time.

He said: “There wasn’t crowd problems. Probably the busiest we ever seen the main stage. The numbers of people taken to the first aid tents weren’t very many, or out of the ordinary, particularly for the size of the crowd. There was nobody hospitalised after the Billie Eilish concert. It was busy, but no crowd problems as such. At 10am this morning (Sunday), a similar time last year, we had 30 people go to hospital and this year we only had 12.”

Mr Benn said that the 2019 festival had a licence for a 60,000 capacity crowd and estimated that “57,500 must have been watching Billie Eilish at the time. That’s why the pressure was there due to the numbers.”