YOU know Electric Picnic is going green when your glitter beard is biodegradable.

There’s still a long way to go to reduce mountains of waste left at the site, but at least your amazing technicoloured body paint won’t pollute the planet.

The Glitter Bug tent in Freetown, with an artistic team led by the wonderfully-named Lily Guinness, did a roaring trade applying biodegradable glitter to shiny, happy faces and all parts of the body. Well, nearly all. 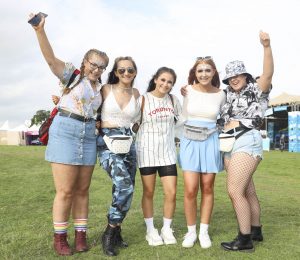 “We’ve put glitter just about everywhere on the human body, except the downstairs genitals,” Lily revealed.

The young arrival sensibly opted for a cheekbone rainbow with a discreet butterfly above the eyebrow, which she reckoned was €15 well spent. A feathered eye mask was €25, glitter and feathers on one eye cost €12 or €20 for both and children got knockdown rates.

A native of Naas, Lily spent the summer bringing biodegradable body art to festivals around the country. Aladdin Sane is always a favourite, while a Mondrian design was one of this year’s triumphs. Biodegradable beards for women are also top of the glitter charts.

According to Lily, the environmentally friendly glitter beard washes away easily in the shower, which is good news for anyone trying to make a good impression in the office this week.

Next door to Glitter Bug, there was no shortage of downstairs genitals in a ‘greengodictionary’ display, which presented enticing phrases and definitions from a glossary of Brazilian expressions to whet festival-goers’ varied appetites. A ‘today have’ apparently means ‘great expectations, usually referring to sex parties or substance abuse,’ while ‘the jiripoca is going to pew pew’ translates as ‘the expectation of intense sexual activity.’ Maybe you’d be better off to ‘do the Egyptian’ and ‘turn your face away, pretending not to know someone.’

Perhaps the best greengo mantra of all was ‘put your face to the sun, sista,’ loosely translated as ‘express yourself, don’t repress yourself,’ which is good advice for Electric Picnic, and for life, just as long as your glitter beard really does rinse off and saves the planet.