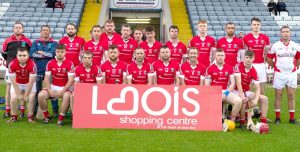 The St Fintan’s Mountrath team who claimed the JHC ‘B’ title with the defeat pof Camross in O’Moore Park on Tuesday night Photo: Denis Byrne

THE first ever championship final meeting between these neighbours produced an exciting hours hurling in O’Moore Park on Tuesday. Mountrath created history claiming their first ever title in the grade while Camross created their own unwanted piece of history by losing three successive deciders.
Mountrath, playing against the breeze, got the perfect start with two early frees but their opening score was a point by Brandon Russell from play after three minutes.
Camross were wide on their first attack and, after Killian Kirwan split the posts from under the stand, Camross opened their account from a free by Dan Delaney although it did not appear on the scoreboard. Brandon Russell added a brace of points from frees and a good point from play by Mick Meade saw Mountrath lead 0-5 to 0-2, former Mountrath man James O’Keefe adding a second for Camross.
Dan Delaney added a point from play for Camross and the deficit was down to two after Robert Delaney pointed from play in the 20th minute. Brandon Russell and Dan Delaney traded points twice and in the closing minutes of the half Dan Delaney converted two close in frees leaving the half time score 0-9 to 0-8 in favour of Mountrath. 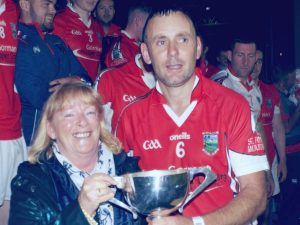 The sides were level within a minute of the restart after a great run by Joe Ryan and a great finish. Immediately Mountrath went back in front with a great point by Mick Meade. The same player added another as did Brandon Russell to leave three between the sides after 40 minutes.
Camross introduced a couple of younger players but with 15 minutes remaining Mountrath led 0-15 to 0-10 and with both defences playing well neither goalkeeper was tested.
However, when Mountrath were awarded a penalty Brandon Russell blasted but Niall Cuddy read it perfectly and brought off a magnificent save. That was in the 36th minute and at the other end Dan Delaney cut the deficit to two. Cormac O’Keefe, whose brother scored for Camross, landed a huge point from his own half.
The final quarter saw James Doran score an excellent point but it was the Mountrath sharp shooter Brandon Russell who kept his side in front. Camross then saw a goal bound effort well saved by Brian Russell and when Cillian Tiernan had another opportunity a defender made a brilliant stop and cleared the danger.
Camross never gave up but long before the final whistle the result was not in doubt. James Doran landed a late Camross point but it was appropriate Brandon Russell would score the last point. He had been razor sharp all evening and he could be a major plus to the senior ‘A’ team when they complete the preliminary rounds later this week.
After the game Sheila McCauley, granddaughter of the late Jackie Daly, presented the Jackie Daly cup to team captain Peadar Rice. He had been selected to play centre back but cried off when he was admitted to hospital at the weekend. However he was granted parole on Tuesday evening and, having come on as a blood sub in the first half, he took his place in attack for the second half and became the first Mountrath player to receive a championship trophy since Anthony Russell 18 years ago.
Camross will be bitterly disappointed but they are mostly a very young team and could still see a lot of game time this year in other grades.