Mo leads Timahoe to their first final in four years 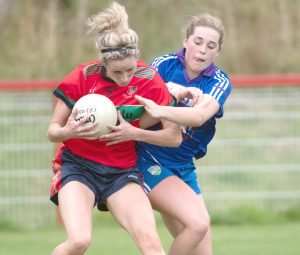 THERE was a time when Timahoe ruled the roost in ladies football in Laois but they have hot on lean times, have not contested a final in four years, or won a title in nine years. Now they are just an hour away from getting back to the top of the pile.
In Emo on Thursday evening they saw off a stout challenge from the league champions St Conleth’s in something of a marathon that lasted a total of 78 minutes.
Mo Nerney was on fire on the night leading the Timahoe attack with gusto and scoring 2-5 in total, all from play bar two points. It was no surprise that she opened the scoring with a point only for Marie Byrne to cancel it out with a free.
Timahoe responded with points from Orla Hennessy and Nerney to go two ahead at the end of the first quarter. However, the sides were locked together by the 19th minute with points from Aine Haberlin and Byrne, and they were ahead when Byrne rattled the net in the 20th minute.
Timahoe were to lose centre back Maureen Young in the lead up to that goal but it did not unsettle them as they went straight back down the field and collected a neat pass to nip around the St Conleth’s keeper and score a wonderful goal.
Mo Nerney added a point from a free which was quickly followed by Timahoe’s second goal. This time Nerney was the provider when her pinpoint pass found Alice Dunne and she made no mistake from close in.
By the 28th minute St Conleth’s had reduced the gap to a goal thanks to points from Sinead Cullen and another Byrne free. But their aspirations were severely dented when a move from deep in defence ended with Nerney finding the corner of the net for Timahoe’s third goal.
With Jenny Murphy and Marie Byrne (free) swapping points before half time Timahoe went into the break leading by 3-5 t 1-5. Realistically they should have been further ahead but were guilty of kicking some shocking wides in the first half.
Sarah Larkin and Orla Hennessy kicked two good points in the opening two minutes of the second half to put Timahoe eight ahead but within a minute that gap had been halved. Claire Fox scored a wonderful solo goal and Byrne adding another point in the space of the third minute.
But Timahoe were not going to be denied and responded with Mo Nerney gathering a long ball and rounding a defender before firing to the corner of the St Conleth’s net. She added a point fro good measure and 20 minutes into the second half Timahoe held an eight point advantage.
It was going to be nigh on impossible for St Conleth’s to reel in that lead but credit must go to them in that they never gave up the chase. They continued to drive forward looking for a few scores. They got some bit of reward when Sarah Walsh got a hand to Naomi Luttrell’s pass for the Saint’s third goal, but it was a case of too little too late.
The last score of the game came with 28 minutes gone in the second half when appropriately Mo Nerney raised another white flag, this time from a free.
As the game wore inexorably on, and on, and on, St Conleth’s continued to try and rescue the game and despite that second period lasting 41 minutes there were t be no more scores.
Timahoe now go forward to the final in O’Moore Park on Saturday next 7 September where they will take on a Sarsfields side which are looking to make it seven-in-a-row titles