THREE committee members from Portlaoise Action to Homelessness (PATH) and two young people who volunteer with other homeless action groups joined a panel live on air recently to discuss the homeless crisis.

Around 130,000 listeners tuned into the Saturday View with Liam Dumpleton on Midlands 103.

Homelessness, food poverty, mortgage distress, lack of social housing and high rents was on the agenda.

Chairperson of PATH Irene Redmond said: “PATH was set up four years ago to respond to the growing homeless crisis. Initially, we went to Dublin every second week with hot food, drinks, sleeping bags and toiletries. The problem has got so bad that we go every Saturday night now with two vans. 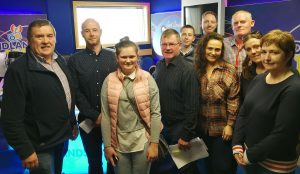 “We run two outreach services in Portlaoise on a Monday and a Wednesday night, which are very much needed. A lot of people who avail of the services have a roof over their head, but they can’t afford to feed themselves. There are so many families out there in dire need. When people think of homelessness the perception is usually addiction and that’s not it.

“There are people who have addiction problems and there are huge mental health issues out there, too, but so many people are really struggling out there. We help people who have jobs, but simply can’t afford to feed themselves because of high rents. There’s one young chap who comes to us every week in Dublin. He has a good job and is saving to get accommodation while he’s living on the streets.”

Presenter Liam Dumpleton said: “I invited every politician from Laois, Offaly, Westmeath, Tipperary and Longford. Thanks to the two councillors Ken Smollen and Sean O’Brien who are here and to Cllr Mick Dollard from Westmeath and to Offaly TD Carol Nolan. Both replied, but were unavailable today. I didn’t get one other single response, not one line of apology, not even a statement I could read out from any councillor, TD or senator. So, when people accuse the politicians of doing nothing, you have just proved them right.” he said.

When asked what he would say to politicians about the country’s homelessness crisis, Gearóid Henderson (16) from Portlaoise replied: “Why aren’t you doing anything? You have the power to do it, so why don’t you just get up off your arses and do something about it. When I volunteer with Feed Our Homeless (FOH), I find it heartbreaking to see people sleeping in shop doorways. Everyone has the right to a home, food and water, that’s one of our human rights.”

“I was homeless in Laois several years ago, but I didn’t seek help from councillors to secure accommodation. I help people with their paperwork. You have to have your paperwork in order before going to the council and you must have a good fight on your hands to get help from them.” she said.

Ms Walsh added that recently she brought a 19-year-old pregnant woman from Laois to Dublin for help because she couldn’t get help in her own county.” she said.

All groups can be contacted on their Facebook pages.