Tractor run to support ill Conor at end of month

CLOGH Vintage Club is organising a tractor and truck run this month for Conor Parr, who was diagnosed with Leukaemia recently. “Conor has just turned five and has been diagnosed with a rare form of Leukaemia,” organiser of the event and chairman of the club Tom Murphy explained. “His parents, therefore, have to travel regularly up and down to Crumlin Hospital with him and one of them has to stay there with him. They are in and out of Kilkenny hospital depending on how he is at the time and one of his parents has to stay there with him. They also have two other children. His father is a farmer and so he has to go and get someone to milk his cows, his father’s there, but can’t do all the work. The local community want to rally around him to help him. We’re no different to any other community in that when people need help, we’ll do our best to help them,” he added. 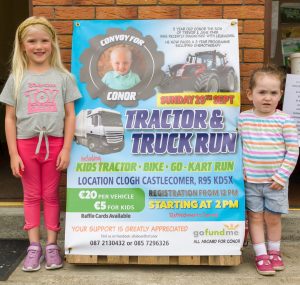 His mother Jane offered more details on his condition. “He was diagnosed with Acute Lymphoblastic Leukaemia in March. At the moment, he is up to Crumlin every day for two weeks and then, after that, will be going into maintenance for two and a half years. He’ll only have to go up once or twice a month then to keep an eye on his bloods. He’s getting chemo, lung punctures and is on other medicines, too. He’s also up to Kilkenny once a week for bloods then,” she explained.

“He’s taking it well, kids are so resilient. He has his first day of primary school on Monday (yesterday), but misses out the rest of the week due to being in hospital, but at least he gets his first day to make friends. He’s doing well, he has a hickman line going through his chest, so everything goes through there so he doesn’t have to use his hand. His big sister Emma really looks after him, she’s only seven so we try to keep her involved and try to explain stuff to her. We’re lucky that we have great friends around us who look after her and take her when we’re in Dublin with Conor, we’re blessed.”

The more support the merrier said Tom. “It’s going to be a tractor and truck run and it’s going to take place in Clough on 29 September. Anything with wheels is welcome, trucks, cars, motorbikes, tractors and so on. There’s also an event for children, if they want to bring their little rolly toys, and we’ll have a little race for them, too, and there will be goodies for them also. Everyone will be welcome. We’re looking for as much support as we can get. Hopefully, we get the turnout we need.

“It will help with car parking fees, money for going up and down every week, money for treatment and stuff like that. We’re also hoping to give something to charity. We don’t have much support from the HSE, we have to do it all ourselves. We get money from the Irish Cancer Society once a year, too,” Jane explained.