Champions experience sees them through to another decider 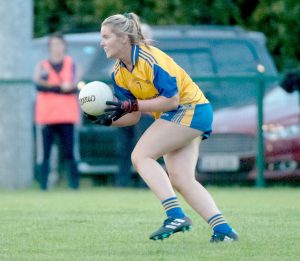 THE score line looks one sided but in fairness to Portlaoise they were not ten points lesser than the reigning champions. Sarsfields are through to another final because of years of experience and having the knowledge on how to get out of tight corners when it matters and taking your chances at all times.
This semi-final was played in Vicarstown under lights last Thursday night before an enthusiastic attendance who enjoyed a well contested game and the referee played his part.
It was at this venue a few weeks ago that Sarsfields suffered a rare defeat when they bowed to St Conleth’s in the league final. Before a ball was kicked in this game Sarsfields had learned that the league champions had made their championship exit and that was further motivation if they needed it.
Portlaoise have been close to Sarsfields on a few occasions in recent years and despite being without a few prominent players all year they were worthy semi-finalists.
The last thing manager Pat Loughman would have said was not to concede an early score. However, the first thing the champions did was to work the ball down the field, involving their big players, where it fell to full forward Lorna O’Sullivan and from close range she blasted past the Portlaoise number one.
Mary Keating added a point after four minutes but Portlaoise worked the ball downfield but finished wide. When they were awarded a free they added a second bad wide.
Meanwhile Sarsfields added points by Leah Tarpey and Aileen O’Loughlin before Portlaoise eventually got on the board through Leah Lenihan. Portlaoise had a great goal chance but their full forward saw a powerful shot rebound off the crossbar.
Sarsfields hit two bad wides but five minutes before the interval Leah Tarpey got inside the defence to hammer home her side’s second goal. Portlaoise then hit a purple patch with points by Alison Taylor and Shauna Jackson but at the other end Megan Dunne and Aileen O’Loughlin did likewise.
Again Portlaoise raised a white flag just before the interval from Aishling Keogh but the champions would have the last say with a good point by Meagan Dunne leaving the scoreboard showing 2-6 to 0-5 at the interval favouring the champions.
Sarsfields would have been pleased but Portlaoise were improving as the half progressed. However, they needed a goal and four minutes into the new half a great passing movement saw the ball break inside. Anna Fitzgibbon reacted the quickest and kicked the ball over the line. From the kick out Portlaoise were awarded a free which converted by Shauna Jackson and now the margin was one goal.
Sarsfields don’t do panic and Leah Tarpey kicked a good point. The champions did lose their shape and hit two bad wides. Portlaoise were winning a lot of possession but they missed two great scoring chances in front of goal.
Sarsfields showed how when from two half chances they kicked two valuable points in as many minutes to leave six between the sides and 13 minutes remaining.
Portlaoise opened the Sarsfields defence again but finished badly wide. They did add a point by Alison Taylor but that would be their final score. Despite the introduction of experienced players like All-Ireland schools winners Grainne Moran and Fiona Dooley they could not break down the champion’s rear guard.
Sarsfields introduced Laura Marie Maher, making a welcome return after another cruciate injury, and she looked sharp kicking a typical point. Further points by Mags McEvoy, Lorna O’Sullivan and Leah Tarpey ensured another final place for the champions.
Next Sunday they meet old foes Timahoe who were convincing winners over the league champions St Conleth’s and this promises to be a thriller. Portlaoise are closing the gap and with a full team they can be better but they need to convert possession into scores if they are to close the gap.