Andrea’s novels to be turned into television series

WHEN Laois’ bestselling author Andrea Carter launches her fifth book in the Inishowen mysteries series, filming for a six-part television series of her first three books is due to begin in Donegal.

Andrea hails from Ballyfin. She studied law at Trinity College Dublin, then moved to the Inishowen Peninsula in Donegal, where she ran the country’s most northerly solicitors practice. She returned to Dublin in 2006 and worked as a barrister before becoming one of the top crime-fiction writers in the country.

The main character in the books is solicitor Ben O’Keefe, whose practice is based on the Inishowen Peninsula in the fictional town of Glendara, where a murder mystery is never too far away. Ms O’Keefe turns sleuth in the novels helping to solve the crimes with the local handsome sergeant Tom Molloy. 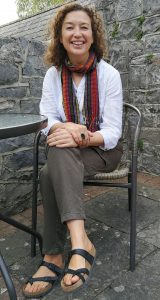 Andrea Carter pictured relaxing at Heritage House in Abbeyleix during the recent Power of the Word festival
Photo: Stan Henderson

The fifth book is titled The Body Falls, which is due to hit the bookshelves next April.

The first three books, Death at Whitewater Church, Treacherous Strand and The Well of Ice are to be turned into a television series.

Andrea said: “There will be extreme weather in the new book, which is just finished, and will be sent to the publishers in the next two weeks. I love to revisit all the characters in my books. I really enjoy going back into that world and returning myself to those characters. It’s like walking down the square in the fictional town of Glendara bumping into old friends and catching up when I sit down to write them again.

“I don’t over describe the characters in my books because I like people to have their own ideas about them and how they look. All the regular characters will reappear in The Body Falls, including Stan, who was introduced in the fourth book Murder at Greysbridge, along with some new ones.

“Filming of the television series on the first three books which have been optioned will begin next year by an Irish-German production company. Each book will be turned into two hours of television in two parts, so six episodes. They will be along the lines of Midsomer Murders, Vera and Shetland. I think that people will enjoy the TV series, as it will be different from reading the books. The production team has asked me what actors I see playing the roles so that they get to see my visions.”

Ms Carter hinted that she would love to launch The Body Falls in her native county. The autumn is full of festivals for the novelist, including the Waterford Writer’s Weekend, Words by Water in Kinsale, the Echoes Festival in Dalkey, Murder One Festival in Dublin and she recently launched Laois’ brand-new inaugural Power of Words Festival in Abbeyleix.

To keep up with the busy author, visit her website www.andreacarterbooks.com.