THE contract for a €3.5m project to remove the notorious ‘Arles bends’ has been awarded to a Kildare-based company.

The successful tender for the N80 Maidenhead Realignment Scheme came from construction company Clonmel Enterprises Ltd, which is based in Naas, Co Kildare. 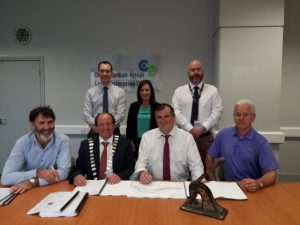 The long-awaited road improvement project will get underway immediately and is expected to take 18 months to complete. The work will remove bends and straighten about two kilometres of the road north of Arles on the main route between Portlaoise and Carlow, which is regarded as one of the most dangerous roads in Laois.

The scheme involves the upgrade of the N80 from the townland of Ballynagall to the townland of Castletown, crossing the townlands of Maidenhead, Coolanowle and Kilcruise. The so-called ‘Arles bends’ are located about 1km north of Arles and 2kms south of the junction of the N78 and N80 roads.

At the contract signing at County Hall, senior engineer Adrian Barrett of the council’s roads and transportation department said it was “a significant milestone in the delivery of another critical piece of infrastructure” for Co Laois. He also acknowledged the support of Transport Infrastructure Ireland (TII), which is funding the project.

The realignment scheme was granted funding by TII in December 2017, following more than three years of planning by Laois Co Council. It will improve visibility and reduce the likelihood of head-on collisions and the danger of cars veering off the steep and winding road.

Road Safety Authority figures show that there were two fatal crashes, one other crash involving serious injuries and 15 minor injury collisions between the Maidenhead and Coolanowle bends between 2000 and 2012.