Plenty of culture on show at Tenakill House open day

MUSIC, dance, recitations and storytelling was the order of the day at the open day at historic Lalor house in Tenakill on Saturday 24 August.

The open day was organised by the Lalor House restoration committee to coincide with national heritage week.

The current owner of the house, Kevin Lalor Fitzpatrick, launched the event. He said that the committee is three years into its restoration project and that “it was essential and important that Irish heritage should be preserved and that the younger generations made aware of the great sacrifices which people made in the past so that the present generation could have a life free of oppression.”

Mr Lalor Fitzpatrick said that considerable progress had been made on the restoration work and he was delighted to welcome the county’s heritage officer Catherine Casey to the event. He said that, from the inception of the restoration project, Ms Casey had been a great source of support and encouragement. 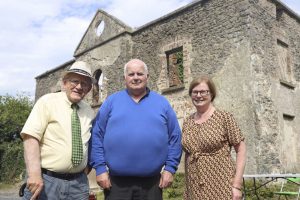 Michael Craig from Rathdowney also provided entertainment with extracts from his one man show C’mere ʼtil I tell you a good one, along with music, song, recitation and storytelling.

One of the visitors to the event, Mary Prendergast from Waterford, took out her accordion and played a selection of slow, fast, old and contemporary airs.

Secretary of the Tenakill Lalor House restoration committee Dan Carmody thanked all the people who attended and gave an account of the work which has been carried out on the house since the committee was formed. He said that the third phase of work would commence shortly.

Among the attendance at the Tenakill open day event were Pat Lalor, who is the current chieftain of the Lalor clan, Mary Carmody, Tom Lawlor and Eamon Lalor, who is a former chieftain, lord de Vesci and cllr Pádraig Fleming.

Those who sent apologies for their non-attendance included the chairman of the National Heritage Council Michael Parsons, minister for justice Charlie Flanagan and Dom Reddin from Laois Co Council.