MEMBERS of the Spink branch of Comhaltas Ceoltóirí Éireann celebrated a successful year when they sat down to a barbecue with all the trimmings in the surrounds of Rockview Walkways, just outside Ballyroan.

Along with acknowledging the many achievements of its members, it also afforded an opportunity to the musicians and their parents to relax and look back on a successful year.

Branch chairman Lawrence Vesey said that the past year had been exceptionally busy, with his own personal highlight being the magnificent concert delivered by Spink Comhaltas members at the end of March, which was a fundraiser for the Laois branch of Multiple Sclerosis Ireland as well as being a memorial concert for the late Tom Bonham. This concert, he said, “had huge support and commitment from everyone in Spink, as well as the local community. This outpouring of generosity helped to raise over €9,000.”

The branch members also excelled in many competitions, with musicians taking part in every age group – one of the few Comhaltas groups in Leinster to achieve this. The all-Ireland Fleadh Cheoil saw a strong representation from Spink, with musicians in 19 competitions winning six medals. 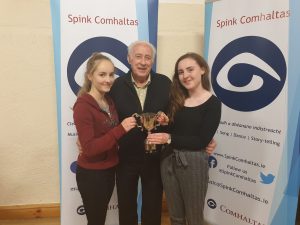 Eabha Dowling McDonald and Maeve Weston, who were15. joint recipients of the Stella Lynch Award, which was presented to them by Brendan Reilly, one of the founders of Spink Comhaltas

“However, music is not all about competitions,” said Mr Vesey.

“Throughout the year, Spink has supported community events across the locality – St Patrick’s Day parades, nursing homes in Abbeyleix and Ballyragget, a summer music seisiún series in heritage house in Abbeyleix in July and August and, most recently, providing the music for the Bulfin heritage cyclists, as well as the Power of Words Literary festival, also in Abbeyleix,” he said.

Spink branch mentors place emphasis on education. To this end, they have prepared and supported young musicians to sit the Comhaltas SCT music exams every year since 2014. This year saw continued success in these exams, with Ceara Mackessy awarded a gold medal for success in the final exam stage – the third year in a row that a Spink musician has won this award.

A large number of younger musicians successfully completed earlier stages of this exam during the year, with SCT certificates awarded to successful entrants at the end of year barbecue last week.

In 2017, to recognise their commitment to Spink over a number of years and to leave them with a memento of their time with the group, Spink Comhaltas commissioned a special commemorative medal, the Spink ceoltóir (Spink musician) medal to present to junior members who turn 18 years old.

Mr Vesey said: “We hope that all of the recipients of this medal will continue their association with Spink, either as an adult member and supporter, as a member of the over-18 groups and bands or reflecting the spirit of Spink wherever they go.

The Stella Lynch trophy was presented to Maeve Weston and Éabha Dowling McDonald.

The award is intended to recognise an under-8 member of the branch who has made an outstanding contribution and who contributes to the overall spirit of Spink Comhaltas.