MORE than 1,400 homeless people will be warmer this winter thanks to Laois volunteers who gathered discarded sleeping bags and tents after the Electric Picnic.

Portlaoise Action to Homelessness (PATH) had 18 people on-site after revellers left the Stradbally Hall campsites. They also had the use of the Stradbally Civil Defence centre for storage.

The group put out an appeal for people to go to the Laois Shopping Centre last Thursday to take some of its 1,000 sleeping bags home to wash and dry for homeless people who live on the streets. Dozens of people turned up on the night.

PATH chairperson Irene Redmond said: “We are delighted with the amount of sleeping bags that we got. These will help keep people warm during the winter months. We were well organised this year. We had three vans and a jeep and trailer in the campsites. We got in at 4pm and left at 6.30pm with around 1,000 sleeping bags. We will give some to other groups, including a group in Cork, The Eating Place in Athy and People Who Share Care in Athboy.” 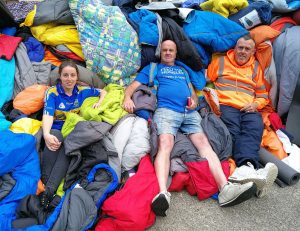 Sinead Newman, Tom Duffy and Mark Lawless taking a well-earned rest in the comfort of the sleeping bags

PATH would like to thank everyone who helped in any way, including Phyllis Meredith, Tom Crosby, Stradbally Civil Defence, Laois Shopping Centre and to its volunteers.

Tom Duffy is a volunteer with Feed Our Homeless.

On the Monday evening following the Electric Picnic, Tom arrived home to Glenbarrow in Portlaoise in a Laois Hire truck driven by employee Mark Lawless with more than 400 sleeping bags. These had been collected by him and several others, including Sinead Newman, Mark Lawless and Tony Walsh.

Tom put out a Facebook appeal to the people of Laois saying: “Washing-powder and Comfort will be needed.”

Last Thursday, Tom said that “all of the 433 sleeping bags are gone. Dozens of people came to my house to collect them. Some are already back washed, dried and ready for tonight’s soup run in Dublin. The handful of us that were there gathered as much as we could. I looked at the step counter on my phone when I got home, thinking that I must have done 10,000 steps, but I had done 68,000 that day.”

Tom wishes to extend his thanks to Laois Hire, the team at the Electric Picnic and to everyone who helped in any way.

Tom Duffy, PATH and Feed Our Homeless can be found on Facebook.