Residents have their say on the future of Mountmellick

THREE days of walking tours, exhibitions, workshops, public discussions and demonstrations provided more than enough information for researchers to find out what the people of Mountmellick want for their town and their future.

Mountmellick was selected along with three other towns whose opinions, concerns, fears and suggestions were sought regarding how they feel about their town and how they would like it to be in years to come.

For three days last week, the research group which organised the event – Free Market – engaged all ages in decision-making processes for the town’s future. 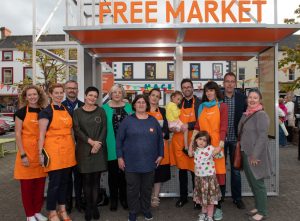 During the three-day programme, local people were invited to explore exhibitions, which included architectural models, photographs, drawings and audio pieces. They were also asked to participate in guided walking tours which led by local historian Anne Sands.

Local embroiders Ann O’Brien and Dolores Dempsey gave a talk and presentation on the intricacies associated with Mountmellick Lace Work, while a heritage town walk was led by local historian Ger Lynch.

The three days of events was organised to stimulate debate and conversations on the future of our small towns, particularly their public realm and market squares.

The findings will be presented to an Oireachtas committee in the coming months by the Free Market team.

More information can be had by logging on to www.freemarket.ie.