Cian was mixing it with the best in Manchester 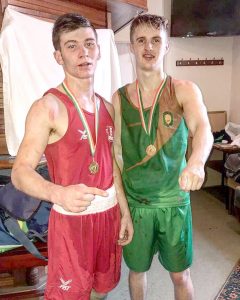 CIAN Reddy, representing the Portlaoise boxing club, travelled to Manchester and competed as a guest boxer on the Holy Family boxing club team. The team was headed up by former international and five times National Senior Elite Champion, Damien McKenna.
Reddy, steadily moving forward towards open class senior boxing, was certainly handed the toughest test on the night. His opponent was Edward Hardy from Highfields boxing club who came with a huge pedigree and a huge CV.
He was the best in his division throughout Britain and Ireland. In over 50 contests he won many by way of KO, and the minimum of two losses on his card, certainly clarified and endorsed his huge pedigree.
Reddy also has pedigree and his record will state this is so. He has been boxing around the block, representing his club Portlaoise at multi-nation tournaments all over the world. He trains, spars with all the senior boxers and travelled ready for the task on hand.
The first round started at a ferocious pace with both boxers giving no quarter. The small ring was certain to ensure there was going to be a contest fought at close range. While the small ring suited the Englishman, a close range boxer, Reddy matched him in all departments. Reddy took a count near the the end of the first round but shrugged it off and got himself ready to answer it in the second round.
He did just that. The second round was all Reddy’s, relentless attacks forcing the referee to give the Englishman a standing count after getting hit with a cracking left hook to the head. The Englishman made the count.
Going into the last round it was level. At this stage, those in attendance were on their feet. Reddy brought the contest right down to the wire. Both boys were out on their feet.
It was undoubtedly the best contest of the night and received the accolade for same. Hardy won on a split decision and was, relieved and delighted, to get his hand raised.
He gave wonderful praise to Reddy. “I don’t think I was ever in a fight as tough and got hit as hard,” he said.
Ready will be happy in the knowledge that his performance was up there with the best after boxing the best of the best.
Pat Ryan, Chairman of the Portlaoise boxing club and Cian Reddy, would like to thank, John Maloney (Publican, Mountmellick) and Cian’s uncle, Billy Quinn (Total Control Demolition) for sponsoring him and the Portlaoise boxing club. Without their much needed sponsorship, these developmental trips and events would not be possible.