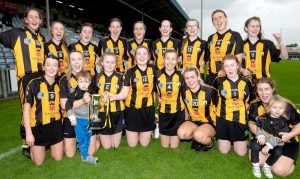 CAMROSS have been crowned the first winners of the Laois Camogie Junior Championship after a wonderful victory over Portlaoise in abysmal weather conditions.
This was the first year that this competition had been introduced and it was a great occasion for these young ladies to play on their county pitch, O’Moore Park, on Saturday.
As Portlaoise took to the field, they were met with strobes of lightning accompanied by thunder. But it would be Camross who would get a lightning start as Laura Drennan’s ‘45 was missed by everyone and ended up in the back of the Portlaoise net.
Both sides were struggling to adjust to the adverse weather conditions and neither side gain any forward momentum in the early stages. Portlaoise got their first point after 11 minutes when Rebecca Reddin fired between the posts. Portlaoise would score two on the bounce as Grainne O’Reilly set up Jane Ward to raise a white flag.
Camross replied to these two scores with a goal from centre-forward Aine Cuddy. They then got their first point on the board courtesy of Therese Keenan and despite the conditions the game was a great watch as it was end to end throughout.
Amy Byrne fired Portlaoise back into contention with a super finish to the back of the net. Goals would be Camross’s saving grace in the game and they got their third after a lovely piece of skill from Kira Bannon as she flicked the sliotar over Chloe Norton’s head and into the net.
Portlaoise were awarded a penalty shortly afterwards as Reddin was fouled in the square. Byrne took the resulting penalty and fired over the bar. Remarkably, Camross would get a fourth goal before half time as full-forward Courtney Lally fired into an empty net.
Camross went into the break leading by seven with Portlaoise needing goals to get back into the game. Byrne got Portlaoise up and running in the second-half with a free before Camross would get in for yet another goal when Chloe O’Riordan set up player of the match Aine Cuddy for her second goal.
Portlaoise needed a big response and they did so when Erone Fitzpatrick went on a superb run before driving the sliotar to the net. Substitute Rachel Glynn proved her worth as she scored a goal minutes after her arrival to get Portlaoise back to within three points of Camross. Byrne then fired over another free to take her tally to 1-4 and reduce the lead to two points.
However, Camross sealed the victory after Aoife Collier converted a ‘45. In the end Camross’s goals proved crucial as their clinical edge in front of goal is what saw them over the line and crown them Laois junior camogie champions for 2019.