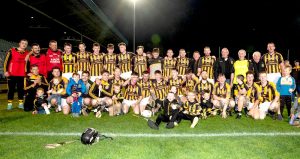 THIS was the third meeting of these two neighbours and on Saturday last after the thunder and lightning had passed on the two produced their own fireworks. At stake was the intermediate hurling crown.
The opening half was well contested. Borris/Kilcotton, aided by the breeze, were slow to start but once Eoin Fitzpatrick found the target they began to improve. Camross shot the opening two points by Kevin Lalor and Oisin Bennett. Points from DJ Kelly and Oisin Fleming had the sides all square after ten minutes.
After Matthew Collier pointed on the run it was Emmett Jones that gave Borris/Kilcotton the lead at the end of the quarter. Borris/Kilcotton dominated the second quarter but bad shooting cost them dearly. They led by two after 18 minutes but against the run of play Camross pounced for the game’s first green flag. Nothing seemed on until the Mark Hanlon was slow to clear his lines and dressing room replacement Joe Ryan pulled first time and the net shook.
Enda Fitzpatrick equalised and two more points from Emmett Jones had the sides locked together once again
The stalemate was broken when David Mortimer found the target with two excellent points from play approaching half time. In injury time Eoin Fitzpatrick brought his total to four leaving Camross in front 1-7 to 0-8 at the break. 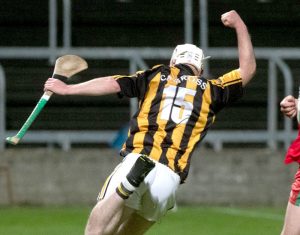 Oisin Bennett turns away and punches the air after a goal on Saturday night Photo: Denis Byrne

Neither teams could have been happy but Camross would have wind assistance on their return. However, two points by Emmett Jones saw the sides all square but David Mortimer regained the lead. Again Emmett Jones offset at the Abbeyleix end and with David Mortimer now finding the target Camross slowly began to take a grip on proceedings all around the pitch. Joe Ryan, having an excellent game, edged his side four clear with 16 minutes remaining.
Then another defence splitting move saw David Mortimer gain possession in front of the goal and his low rasping shot flew beyond Mark Hanlon and now the tide was turning.
Oisin Bennett and Emmet Jones swapped points but Borris/Kilcotton were too dependent on Jones for their scores. Odhran Phelan added a Camross point before the killer blow arrived ten minutes from time. Oisin Bennett won possession and beat two defenders before hammering home his side’s third goal and there would be no way back for Borris/Kilcotton.
A brace of points by Robert Tyrell and another by Mortimer was making the scoreboard look one sided. Borris/Kilcotton were shell-shocked and two late points by John Wall and Emmett Jones brought their scoring to an end.
Camross closed their account when substitute Robert Delaney struck from an acute angle.
Borris/Kilcotton were devastated. They played a grand passing game in the opening half but 12 wides was their undoing.
Camross lost a number of first choice players to their senior team but it’s an indication of the wealth talent at their disposal that they could find replacements. However, their most ardent supporters could not have anticipated such a closing 20 minutes that saw them score two goals and eight points and might have added more for their first title at this grade since defeating Ballyfin nine years ago.
After the game the man of the match award went to David Mortimer but there were several contenders in defence and attack. Earlier this year they won the new Leinster league as well as the Division 2 league title.
Damien Keenan accepted the Willie Hetherington Cup from Peter O’Neill and dedicated the victory to the club’s much loved chairman Phil Duggan who died suddenly two days after the semi-final victory over Clough/Ballacolla.
The intermediate success brought down the curtain on an amazing three days for the club. On Thursday the under-17 team beat Rathdowney/Errill in the Shield final. On Friday the seniors reached the semi-final at the expense of Castletown. On Saturday the camogie teams captured both junior and intermediate titles and not to mention the Coolrain horse Pivotal Flame galloping past the post at 25-1 in Ballinrobe on Friday.