The Harps are Foyle wrapped as history is made 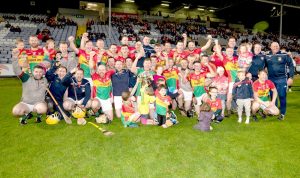 The Park/Ratheniska-Timahoe team and management celebrate their Junior Hurling Championship title win at the expense of The Harps at O’Moore Park on Saturday Photo: Denis Byrne

WHAT began as a routine junior hurling game gradually turned in to an absolute thrilling contest and a second half that saw the new kids on the block grow in confidence, and wear wore down the challenge of the Harps seeking a first title in the grade since 2005.
Conditions were perfect for hurling in O’Moore Park on Saturday and after a slow start dressing room replacement Sean Tynan became the first man from the new combination to score a goal in a final after he pressurised the Harps defence.
This was very important for a team making their first appearance in a final but the Harps were soon back on the attack and Conor Deegan had the ball in the net after 13 minutes. The two teams were nervous in the opening quarter and mistakes cost both scores.
Robbie Foyle and Evin Deegan traded points as did Ross Young and Paschal Foyle leaving the Harps in front 1-6 to 1-3 after 25 minutes. Then Ruairi O’Connor beat off two tackles before unleashing a powerful shot past Lorcan Fitzpatrick to edge PRT back in front. Next Robbie Foyle posted a perfect point.
Further points were exchanged before one of the scores of the championship was recorded. A long delivery from midfield reached Niall Brophy, he twisted and turned before blasting well wide of Ger Ramsbottom.
After Padraig Kelly placed Robbie Foyle for a point the sides retired for half time leaving the Harps ahead 2-7 to 2-5. 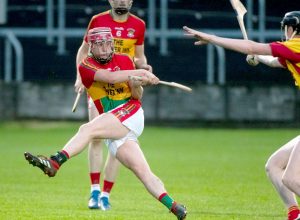 The second half began at pace and after PRT were wide Damien O’Connor landed a massive point to narrow the gap to the minimum. PRT selectors were not slow making changes and Sean Tynan, who had worked hard, was replaced by Pat Kelly in attack after 40 minutes. Lorcan Fitzpatrick brought off a great save to deny Robbie Foyle who then fired over the equaliser from a free.
The Harps bounced back with points by Ross Young and a superb effort by Aaron O’Grady to lead by two at the end of the third quarter.
The game was still there for both teams but two minutes into the final quarter a game changer when Paschal Foyle struck a low ball from 30 metres out. It looked as if the keeper had it under control but the ball took a wicked deflection and spun in over the line and the lead had changed hands again.
Points by Ruairi O’Connor and Paschal Foyle left PRT three clear with seven minutes remaining. Conor Deegan traded points with Paschal Foyle before Ruairi O’Connor burst past two defenders to hammer home his side’s fourth goal. And to complete a great day for the Foyles, Robbie added the game’s last score.
After the game Peter O’Neill presented the Fr Phelan Cup to joint captains Geoff Kingsman and Jim Langton the first championship success in hurling for either clubs since Kieran Bergin brought the same trophy to the Round Tower village seven years ago.