Ballyfin survive late Shanahoe rally to advance to the semi-final 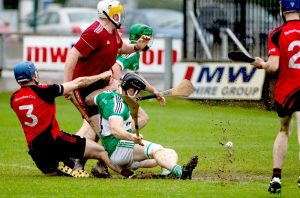 Is it ging wide or is it going in – action from the SHC ‘A’ quarter-final between Ballyfin and Shanahoe in a rain-soaked O’Moore Park on Sunday Photo: Denis Byrne

BALLYFIN kept their dreams of being the only club in the county with senior teams in both codes alive when they held off a late challenge from Shanahoe in O’Moore park on Sunday.
Featuring six of the players that assisted the footballers to an unexpected senior football semi-final just a week prior, the lads in green made light of the horrific weather conditions and teeming rain to play an structured brand of hurling that Shanahoe could not match.
Considering the atrocious condition both teams got the game off to a decent start with some excellent scoring. Shanahoe took the early initiative after Rhian Bergin converted a free and Dayle Bergin split the posts from close to the half way line.
That was after five minutes and within another five minutes Ballyfin had taken the lead thanks to David Connolly pointing from play and a brace of frees from Gareth Dunphy.
The next ten minutes saw the sides go tit for tat. Martin Kirwan and David Connolly swapped points while two more points from Rhian Bergin (free) and Dylan Cuddy had Shanahoe ahead by the minimum at the end of the first quarter.
Rhian Bergin scored Shanahoe’s six point but either side of that Gareth Dunphy (free) and Eanna Lyons raised white ensuring the sides were locked together again. And this was how it remained in the 23rd minute after Dylan Cuddy and Gareth Dunphy had exchanged points.
But from here to the break Ballyfin took complete control. Louis Duff spotted Eamon Duff’s run into space and the full forward put the sliotar over the black spot to edge his side back in front.
Richie Downey made it a two point game just before Darragh Hiney made the first of his excellent saves. This time he somehow got a foot to Dunphy’s shot after he had been placed by James Finn. However Eanna Lyons popped the rebound over the bar.
Further points from Richie Downey and Darragh Connolly put five ahead but that was back to four at the break after Rhian Bergin converted a 65, Ballyfin leading 0-12 to 0-8 at half time. 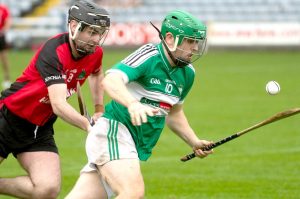 With Gareth Dunphy and Rhian Bergin swapping placed ball that was how it remained five minutes after the restart but Ballyfin were beginning to take control.
Three minutes later Bergin converted another free while points from play quickly followed from James Finn, Eanna Lyons and a beauty from Gary Hoffmeister. Suddenly the gap was eight points coming to the end of the third quarter.
Shanahoe mounted a bit if a revival Mark Kirwan gathered the sliotar, turned but kicked over from close range, followed a Rhian Bergin 65.
Ballyfin swiftly snuffed out these two scores, the first points a beauty by wing-back Louis Duff and yet another Dunphy free. But despite playing the better hurling Ballyfin just could not shake off the men in red.
An excellent long range point from Leigh Bergin in the 52nd minute maintained Shanahoe’s interest and that was to peak almost immediately.
When Rhian Bergin launched a long range effort into the Ballyfin goalmouth the best he probably hoped for was a point. But the sliotar fell short of that but somehow evaded everyone’s attention and slipped into the top corner of the net.
Ballyfin looked to have had the perfect response when from the puck out the sliotar was worked to Eamon Duff who buried it in the net only for the score to be over ruled after the referee deemed the last pass had been thrown. It got worse when Dunphy ghosted on but was denied by a good Daragh Hiney save.
Then when Rhian Bergin popped over a free just three points separated the sides with two minutes of normal time remaining and the pressure was on Ballyfin.
Another Dunphy point on the hour mark settled Ballyfin nerves but with four minutes added time announced there was still plenty of time for Shanahoe to strike back.
However, the result was put beyond doubt in the 62nd minute when a long range Dunphy free was flicked to the net by Richie Downey.
Fittingly Dunphy landed the last score of the game with his ninth point of the afternoon and ensure a semi-final meeting with The Harps.