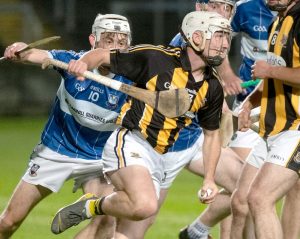 THE semi-final line up has a familiar look about it after these neighbours kick started the weekend with a score-fest. After Castletown looked the real deal in the opening half they changed tactics on the changeover and, although still in front with 15 minutes remaining, they ran out of steam and only managed three points in the second half.
While they would not have been happy with the final result, their inability to break down a Camross defence in the second half that looked porous for 20minutes in the opening half would have been particularly disappointing.
Camross came into the game on the back of a poor scoring campaign and both of the teams would have been considered outsiders for honours.
Castletown had two good wins under their belt but the champions were in the quarter-final because they claimed victory over Abbeyleix and they were penned in for a relegation final at the weekend.
Camross began brightly with Eoin Gaughan landing a brace of points while one each from Ciaran Collier and Dean Delaney inside five minutes had their supporters beginning to think it might be easier than expected.
Castletown may have been slow to take off but a point from a Ryan Mullaney free in the sixth minute was the signal for a seven point blitz. Three in a row by Dylan Conroy saw the sides all square after ten minutes. When Conor Phelan landed a huge score from play three points separated the sides. Dean Delaney interrupted the flow and Niall Holmes opened his account from a free but Gearoid Gaughan replied at the other end.
Camross were struggling to get back into the game and Craig Carroll landed a point from midfield in the 18th minute leaving the minimum between the neighbours. When Lorcan Burke landed a monster from defence it was all square.
If the champions thought they had reined in their opponents they got a rude awakening. When Martin Phelan found space near the end line he fired his side’s first goal and after both sides squandered chances Castletown struck again five minutes before the interval. A high ball in bounced off the upright and Phelan was in the right place to beat the Camross keeper and the margin was five.
Gearoid Burke and Dylan Conroy traded points from placed balls and before half time Ryan Mullaney and Niall Holmes did likewise leaving the champions trailing 0-11 to 2-10. 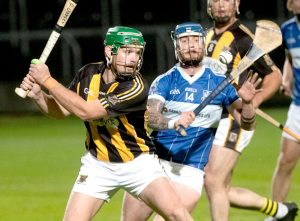 Darrell Dooley gets this shot away for Camross against Castletown Photo: Denis Byrne

The breeze would favour the champions in the second half but Castletown were first to score. Camross responded with four great scores, Niall Holmes, Lorcan Burke, Andrew Collier and possibly their best player Tomas Burke on target.
Dylan Conroy pointed a free for the challengers and the next five Camross attacks all missed the target. However, Niall Holmes reduced the margin to two points in the 43rd minute. Castletown replied with their third point of the half with 15 minutes remaining. Amazingly the challengers would not bother the umpires again.
At the other end Niall Holmes made no mistake from a placed ball and Tomas Burke added from play. Although they hit another two wides, the champions drew level with 11 minutes remaining. They were taking a grip and the biggest cheer of the evening was when the smallest man on the pitch, Craig Carroll fired the champions back in front with six minutes remaining.
Could Castletown regain their foothold in the game? The answer was no and, playing with a swagger, the champions added three more points to reach their seventh successive semi-final.
Castletown will ponder why they went more defensive on the changeover after a very impressive opening 35 minutes. They can now only look forward to a junior football final on Saturday against O’Dempsey’s.
Camross had two options in the semi-final draw. One was Clough/Ballacolla who had beaten them in round three and the other was the team they beat in last year’s final, Rathdowney/Errill. The draw ordained a first semi-final between these two clubs that drew three years ago when Enda Meagher scored the winner in injury time in the replay.