Rosenallis cruise past Mountrath to a last four place 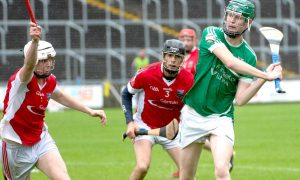 Walter Murphy (Rosenallis) about to play for a score against Mountrath during the SHC ‘A’ quarter-final in O’Moore Park on Sunday Photo: Denis Byrne

THERE was much debate in the O’Moore Park stand on Sunday as to whether this game would go ahead or not as an absolute deluge teemed down.
In any event the game did go ahead but I’m sure Mountrath were sorry it did get the go ahead. They might b point to the abysmal conditions as playing a part in their demise but the simple fact was Rosenallis were a far superior outfit and must now be favourites to advance to the senior ranks.
Some would say the game was over by half time but the truth is that this game was over by the end of the first quarter. It is a long time since I have seen a team being so out-classed as Mountrath were and not just over the opening quarter but over the entire game. You always expect a team to enjoy some short period of dominance but that never materialised on Sunday.
Paddy keating striuck for Rosenallis started the rout with two points from Paddy Keating (free) and Ronan Murray. And we had the first goal as early as the sixth minute when Donnagh Callally went on a good run before passing to Brian Fitzpatrick and he rattled the net from close range.
John Lennon, Fiachra C Fennell, Fitzpatrick, Paddy Keating and Conor Cosgrove were all to add points before Jimmy Hyland eventually opened Mountrath’s account from a 28th minute free. By that stage Rosenallis had 1-8 o the scoreboard and with Paddy Keating adding a further three his side held an unassailable 1-11 to 0-1 lead at the break. 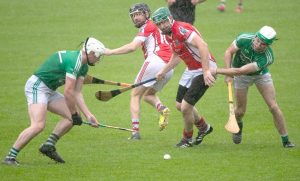 It was getting almost embarrassing but Rosenallis were not about to ease up in the slightest. Paddy Keating and Jimmy Hyland swapped points soon after the restart but Rosenallis were about to restore normal service.
Donnagh Callally, Paddy Keating and Cosgrove all raised white flags before half time substitute Brandon Russell converted a free in the 42nd minute for Mountrath’s third point.
He was convert another free six minutes later but in between Paddy Keating struck for Rosenallis’s second goal. And just when Mountrath must have thought things couldn’t get any worse Rosenallis were awarded a penalty. Goalkeeper Stephen Kelly made his way up field and buried the sliotar beyond his counterpart.
Rosenallis rounded off the scoring with points from a Keating 65 and Jack Friel and Walter Murphy from play.
As if to sum up Mountrath’s afternoon, they were awarded a late penalty but Jimmy Hyland’s shot skimmed off his hurl and over the bar and the final point, a free from Brandon Russell didn’t even mange to take the bad look off the scoreboard.
Rosenallis can now look forward to a semi-final meeting with Colt.