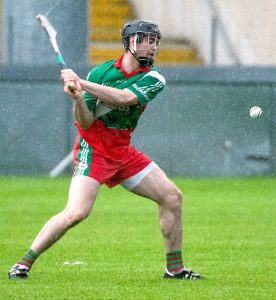 Borris/Kilcotton’s PJ Scully made light of the horrendous to score 2-8 in the SHC quater-final defeat of Ballinakill in O’Moore Park on Sunday Photo: Denis Byrne

GIVEN that this was the third game of Sunday’s O’Moore Park triple-header it is nothing short of a miracle that these sides managed to serve any sort of an entertaining game. With throw-in at 4pm O’Moore Park had been under an unrelenting deluge that had pools of a water all over the surface.
Credit to the two teams they did their best to play some decent hurling but controlling the sliotar was near to impossible. In the event it was Borris/Kilcotton that mastered the conditions the best to run out convincing winners.
From the start they controlled affairs and with PJ Scully amazingly making light of the horrendous conditions from play and from placed balls the outcome was decided long before the final whistle.
Borris/Kilcotton drove forward at every given opportunity and this resulted in forcing Ballinakill into conceding frees which Scully was happy to capitalise on.
At times the game became quite testy which in some ways was down to the conditions but whatever the reason referee Alan Doheny was a busy man keeping the lip on what could have become an explosive situation.
For five minutes the sides matched each other, Aaron Dunphy, Scully and Stephen Dunphy on target for the winner while Cha Dwyer and Eamon Jackman pointed for Ballinakill. But thereafter it mostly one way traffic.
By the 20th minute six points separated the sides after Daire Quinlan, Joseph Campion and Scully all raised white flags for Borris/Kilcotton with Ballinakill’s only response coming from Jackman.
Two further points from Sean Downey and Cha Dwyer raised Ballinakill hopes, but only briefly. Two Scully points from frees and an excellent point from Danny Fitzpatrick had seven between the sides approaching half time.
That was how it stayed after Cha Dwyer went for goal from a free 25 metres out only for it to be saved meaning Borris/Kilcotton led by 0-12 to 0-5 at the break. 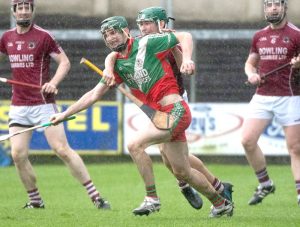 Ever so briefly Ballinakill matched the leaders score for score on the restart, Aaron Dunphy and Scully’s points matched by Jackman’s two frees.
The game was over as a contest 11 minutes after the restart when Scully sliced through the Ballinakill defence and rifled to the net. Cha Dunphy and Cha Dwyer went on to swap points and the men in maroon enjoyed the best period of the game during which Jackman converted another two frees and Podge Lalor split the posts with a massive effort.
That did not worry Borris/Kilcotton especially after Scully flicked goalkeeper Eoin Fleming’s long range free to the net with ten minutes remaining.
From there Scully and Jackman exchanged free before substitute Emmet Jones struck for the winners’ third goal. Evan Dunne landed Ballinakill’s last score but it was appropriate that the final score of the game should go the PJ Scully. Now he and his team mates can start preparing for a semi-final meeting with Clough/Ballacolla.