ELEVEN brave women have bared all for a ‘cheeky but classy’ calendar that will literally light up Mountrath.

After weeks of suspense, the identities of the magnificent models were finally revealed at the electrifying launch of ‘Calendar Girls’ in Kirwan’s pub.

Mountrath native and RTÉ broadcaster Claire Byrne hosted the ‘Big Reveal’ before a packed house at the fun-filled launch, as she announced the names of the cheekily cheerful calendar ladies month by month. Each model accepted a well-deserved glass of bubbly as she took to the stage, surprising not only friends and residents but even her own family. 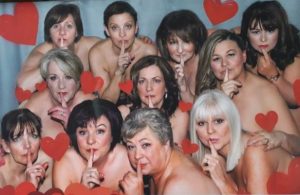 The December 2020 image reveals the identities of all 11 brave women who bared all for a cheeky but classy calendar, which will raise funds for Mountrath’s Christmas lights

The idea of doing a ‘Calendar Girls’ shoot, like the hit film featuring middle-aged women posing nude behind carefully-placed fruit bowls and domestic appliances, was a light-bulb moment for the Mountrath Christmas lights committee. On sale now at €10 each, the calendars will raise much-needed funds for the town’s Christmas lights.

The women had great fun doing the photo shoots in different locations in and around Mountrath, each posing for a different month for what the committee describes as “a very classy and a little bit cheeky” calendar. The identity of the models was top secret until the ‘Big Reveal’ in Kirwan’s.

The Christmas lights committee warmly thanked everyone involved in the Calendar Girls project and the launch, which was a wonderful night of special memories. The 2020 calendars will on sale at The Square from now until the end of the year, with all proceeds going towards maintenance and upgrading of the town’s glittering Christmas lights.