Connacht debut for Sean when replacing his brother 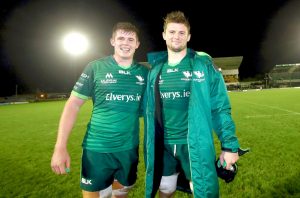 Sean Masterson (left) who made his Connacht senior debut on Friday’s PRO 14 defeat of Treviso with his brother Eoghan whom ironically he replaced Photo: INPHO/James Crombie

FRIDAY night was a very special one for former Portlaoise player Sean Masterson who made his senior Connacht debut when they defeated Treviso in the Sportsground in Galway.
Once it had been announced that Sean was to be a reserve for the game the hope this side of the Shannon was that he would get to make his debut but also get to play alongside his brother Eoin who was selected on the starting xv.
In an ironic twist of fate, the brothers did not get to play together as Sean was introduced as a replacement for his brother in the final quarter. But nevertheless it was a huge occasion for Sean and hopefully just the first of many more appearances.