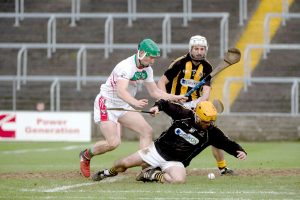 THEIR last semi-final meeting ended in deadlock and in the replay Rathdowney/Errill snatched victory in injury time courtesy of Enda Meagher. On Sunday last the champions had defied the odds and were two points clear heading into injury time.
But in one of the most dramatic conclusions ever to a senior semi-final a well taken Ross King goal was to end Camross’s two year reign as champions and send Rathdowney/Errill to the final.
Camross opened the scoring with a point from last year’s captain Niall Holmes but Laois captain Paddy Purcell landed equalised a minute later. His side went in front with a free converted by Mark Kavanagh in the fourth minute.
Then a great Rathdowney/Errill move, that has been their trademark all year, saw Pat Purcell race into the corner, spray a perfect pass to Ross King. With time on his side he let fire but struck an advertising hoarding and the champions breathed a sigh of relief.
Andrew Collier and James Ryan traded points from play before the sharpshooters exchanged points and at this stage it was obvious both defences were being cautious and the goalies were seldom tested.
Joe Fitzpatrick landed a long range point but Ciaran Collier replied for Camross. Jack Kelly and Niall Holmes then traded points as did Mark Kavanagh and Niall Holmes ensuring both sets of supporters were kept n the edge of their seats.
John Purcell was having a fine game and landed one of the scores of the game in 18th minute. When Mark Kavanagh stroked over another his side led by three and looked like kicking on. But in a flash Dean Delaney split the uprights with two great points. Mark Kavanagh added another but two in a row by Niall Holmes ensured deadlock at the interval the sides on 11 points apiece.
While the champions were under dogs coming into the game they must have been happy enough with their first half display, especially the performance of their defence. Having steam rolled all opponents Rathdowney/Errill were probably a little dissatisfied but still where they were at the beginning.
Eoin Bourke made way for Tadgh Dowling on the resumption and when Camross hit three wides within five minutes they needed a change as well.
Ross King regained the lead for the challengers after 33 minutes but neither would score again until Eoin Gaughan shot the equaliser seven minutes later.
Mark Kavanagh opened his second half account from a free but Niall Holmes, having missed from a free, sent over the equaliser entering the final quarter. After a double exchange between Holmes and Kavanagh the sides were still locked together after 53 minutes.
Camross had introduced Lorcan Burke and with his second strike he regained the lead for the champions with six minutes remaining. Paddy Purcell saw a great effort drift wide and from the puck out Craig Carroll put two between the teams and the clock showing four minutes remaining.
In the middle of all this Camross had introduced Zane Keenan for his first taste of championship hurling since last year’s County final. He won possession but his shot dropped short. And when Camross won a free in their own half he was entrusted with the effort but the ball tailed off to the left of the upright.
When the ball was pucked out the game was in injury time. Rathdowney/Errill won possession and worked the ball into Ross King who cut in from the left before firing a powerful shot into the roof of Tadgh Doran’s net. Suddenly the challengers were in front.
They were awarded a free from the puck out as Camross chased an equaliser in the closing seconds. The free went wide but the final whistle sounded and brought down the curtain on an enthralling contest.
Rathdowney/Errill were back in a first final since losing to Borris/Kilcotton four years ago and they will be their opponents again on Sunday week. Having sauntered through the campaign this was a real test and they survived but improvements will be required if they are to claim a first title since 2014.