A PROTEST at a site near Ratheniska that’s earmarked for a €110m electricity power station enters its 470th consecutive day today, Tuesday 8 October.

Since June of last year, locals have blockaded the 20-acre site at Coolnabaca to stop EirGrid’s Laois/Kilkenny Reinforcement Project, which plans to take electricity from the 400kv electrical line that travels from Moneypoint in Clare to the greater Dublin area and diverting power to the Kilkenny region.

The blockade is part of a festering dispute that has been ongoing for ten years. The issue has been through the planning process, including an An Bord Pleanála (ABP) oral hearing and the High Court, which both approved the project.

The protestors’ main concern centres on contamination to a water aquifer near the site, but ABP says that that particular concern has been assessed through an environmental impact statement, which found that the substation would not pose a danger.

While EirGrid insists that the project is designed specifically to link up with the Kilkenny line, local people see it as a Trojan horse that will be used as a hub for wind farms.

Over the years, local public representatives have been highly critical of the company. At one stage, minister Charlie Flanagan called for the project to be “abandoned” and for the company to “pack up their machinery and not come back”. 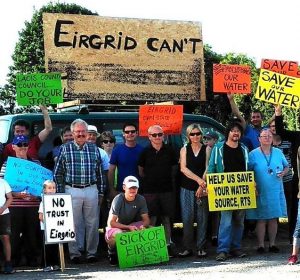 Deputy Seán Fleming said that “EirGrid now has no option but to walk away from the site, while deputy Brian Stanley stated that the company was “riding roughshod” over the community in Ratheniska.

On Friday 27 September, ESB Networks said that it has sought an independent evaluation of the local community engagement in its project and has engaged Irish Rural Link to do this work.

Paul Dempsey from ESB Networks said: “Working on behalf of ESB Networks and EirGrid, Irish Rural Link will engage with concerned local parties on the project.”

Spokesperson for the Ratheniska, Timahoe, Spink (RTS) Action Committee Colm Fingleton said: “Again, EirGrid/ESB have ignored the local community by hiring a third party and say they are independent to evaluate this project, clearly demonstrating that they have not changed the way that they communicate and treat local communities. EirGrid and ESB are fully aware of the issues, as the community have endlessly presented the evidence base underpinning the reasons why this project cannot go ahead.

“This is yet another attempt by ESB/EirGrid to deflect from the real issues attached to the EirGrid project in Coolnabacca, which haven’t changed in the last ten years.

“The developers have already broken and ignored their planning conditions, engaging in unauthorised development, when EirGrid/ESB were removed from the site and forced to reinstate it.

“EirGrid are currently the subject of two separate investigations by the EU Commission and the United Nations into non-compliance (breaches) of environmental and human rights law specifically on this project.

“This project is a disaster waiting to happen. The position of the community has not changed in ten years. We are calling on environment minister Richard Bruton, minister Flanagan, deputies Fleming and Stanley and Mark Foley of EirGrid to withdraw this fatally flawed dangerous project immediately and end this long-running harassment of our community.”