Rosenallis ease into their first final 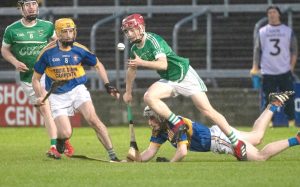 WHEN they met in the quarter-final 12 months ago Rosenallis emerged victorious with 14 points to spare and Colt then had assistance from Clonad. In miserable conditions last Saturday evening the margin was one point more but this time Rosenallis were reaching their first final in this grade.
Rosenallis have been knocking on the door for some time and now eventually they get to take their place on county final day.
Colt were hoping to build on some promising displays that saw them go directly to the semi-final but in hindsight a more scenic route might be more advantageous.
When defender John Maher raced down field he split the posts and Rosenallis’s second point was from Pat Keating, a free, before the keeper Stephen Kelly made it three in the fifth minute.
Colt pulled one back from Mark McDonald in the 12th minute. Pat Keating and Chris Murray exchanged points and Colt were defending well but seven minutes before the interval their defence was slow to clear their lines and Walter Murphy eventually scooped the ball over the goal line.
This was a blow to Colt but credit their full line of defence they would not concede another score. Pat Keating converted another free, then two in a row by Jack Conroy put daylight between the sides, Rosenallis leading 1-8 to 0-3.
Before Conroy’s goal Colt had a great goal opportunity but Rosenallis keeper Stephen Kelly brought off a good save.
Colt did finish the half well with a well struck free from Chris Murray and James Keyes from play leaving the half time score 1-8 to 0-5 in favour of the green clad side. 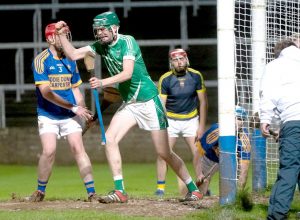 Joe Moffit would have been happy enough having introduced Colm Kavanagh before the interval and when the sides returned Brian McDermott had been replaced by Robert Delaney.
The last thing the mentors would have said to the defence was keep it tight but within a minute John Lennon had soloed down field and struck for his side’s second goal while Fiachra Fennell added a point.
The new half was 12 minutes old before Mark McDonald opened the Colt account with a point from play. John Lennon, who had been quiet in the opening half, then landed a brace of points before Pat Keating made it 2-13 to 0-7 with ten minutes remaining.
Colt never gave up but when Rosenallis defender Fiachra C Fennell raced down field he blasted past the Colt keeper to ensure Rosenallis will contest two big championship deciders.
The closing minutes saw two Rosenallis, subs Enda McEvoy and Jack Friel, pop over points. Robert Delaney replied for Colt as did Chris Murray but to little effect.
After a hard fought football encounter a week earlier Rosenallis were comfortable winners and were left awaiting the result of last night’s (Monday) delayed semi-final between the Harps and Ballyfin.
Can Rosenallis complete a unique double, only time will tell but this present weather hardly helping their cause.
Colt were always going to be underdogs but would have expected to be closer at the final whistle but with young talent coming on they will be contenders again next season.