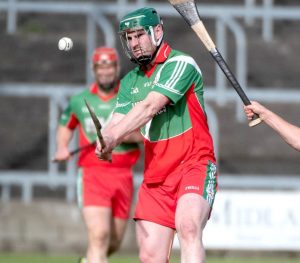 FOR the third year in succession Borris/Kilcotton shot out the Clough/Ballacolla lights, and that was after losing two defenders in the first 22 minutes having earlier being forced to line out without their inspirational captain of three years ago.
Clough/Ballacolla too had their problems when sharpshooter Stephen Maher was withdrawn after having his appendix removed and Lee Cleere being ruled out through illness.
This was their second meeting in the championship when Clough/Ballacolla were comfortable winners in round two. After Willie Dunphy opened the scoring from play it was PJ Scully who equalised from a free in the fifth minute. Aaron Dunphy fired over the lead point for Borris/Kilcotton but he would not score again.
After Scully posted his second point Clough/Ballacolla caught the Borris/Kilcotton defence napping when Stephen Bergin beat the keeper from close range.
Jordan Walsh posted a point and it looked as if matters were falling into place for Clough/Ballacolla. After another point by Scully, Willie Hyland opened his account from play in the 13th minute.
Stephen Bergin left a goal separating the sides before an exchange of points between Aiden Corby and Neil Foyle. After a further three strikes by Scully the sides retired at half time on level terms 1-6 to 0-9.
At this stage the game was delicately poised and neither manager would have been happy but the second half would follow a similar pattern.
Willie Hyland and PJ Scully trading points but Clough/Ballacolla were wasting too many chances, particularly from placed balls. Borris/Kilcotton defender Dan Fitzpatrick then fired over an inspirational point from play followed by another from Scully with just six minutes played in the new half. 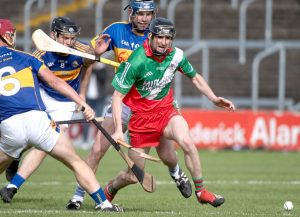 Aiden Corby showed his forwards how to do it reducing the deficit to a single point. Clough/Ballacolla manager Canice Coonan had seen enough and sprung Stephen Maher.
However, two superb points by Joe Campion in less than two minutes lifted Borris/Kilcotton who now led by three and they were hurling with confidence.
Brian Corby then found the target but so too did Daire Quinlan for Borris/Kilcotton. Stephen Maher converted a free and after he did likewise two minutes later the margin was still four.
Further exchanges between Willie Hyland and PJ Scully ensured the margin remained at four entering the final ten minutes. Scully then cut a line ball between the uprights and Willie Dunphy replied.
But Borris/Kilcotton were now dictating matters and when Clough/Ballacolla conceded a penalty Scully had the luxury of tapping the ball over the bar. Emmett Jones came on and put his name on the score sheet.
Stephen Maher posted his fourth point but by now the game as a contest had fizzled out. Borris/Kilcotton were in their third final and looking forward to regaining a title they won four years ago.
Clough/Ballacolla will be wondering what went wrong since they beat their opponents in both league and championship. Now they will ponder on the loss of Stephen Maher. If he could score four points in a quarter what might have happened had he being there earlier but he is only recovering from surgery. It would have been a risk for him and remember he missed their last final two years ago and was greatly missed.
If Borris/Kilcotton can get all hands on deck they will fancy their chances against Rathdowney/Errill. Remember they were the bookies favourites before the championship commenced.