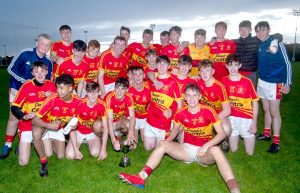 PLAYED in difficult conditions the Harps under-17 hurlers swept to a hard earned victory over their neighbours Abbeyleix Gaels in what proved to be a hugely competitive contest in O’Moore Park on Saturday night.
These two sides have always been close at under age level with the Harps shading victory on most occasions but not last year when Abbeyleix defeated them in the minor final.
And it was Abbeyleix that set the early pace on Saturday with well taken points by Aaron Brennan and full forward Lee Maher causing problems. However, once they settled down the Harps looked sharp and Jim O’Connor struck for a goal early into the second quarter.
Now Abbeyleix looked nervous and in contrast after points by Ciaran Burke and Conor Delaney the Harps grew in confidence. Abbeyleix replied with good points by Jim McWey, from a line ball, Lee Maher from play.
But then a great passing move saw Jim O’Connor pick out the well placed Cody Comerford and he gave the keeper no chance for the Harps second goal.
Abbeyleix then tried desperately for a green flag but were denied time and time again but points by Aaron Brennan and Lee Maher ensured the half time margin was those two well taken goals. That said, Abbeyleix were still very much in the game as the teams made their way back on a pitch that was cutting up especially around both goals.
Early points on the restart were traded between Conor Delaney and Aaron Brennan. Then followed a turning point. As Abbeyleix were pushing for a score centre forward Aaron Brennan was going through but was fouled and awarded a free that would have narrowed the gap. But as he went to strike the free a Harps player tried to block him down and Brennan continued his strike and cut across his opponent. The referee adjudged he had deliberately hit the player and Brennan was issued with a red card.
This was a huge blow for the Gaels who then hit two bad wides from frees. At the other end Conor Delaney fired over a great score to put eight points between the teams. 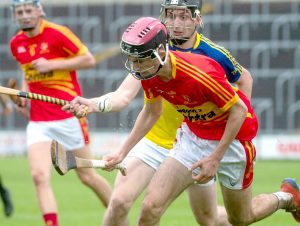 The Harps’ Rian Edwards has his eyes on the sliotar Abbeyleix Gaels’ Lee Maher closes in Photo: Denis Byrne

Abbeyleix had not gone away and they launched a high ball in the direction of the Harps goal mouth. The ball fell kindly to Cian O’Shaughnessy but the keeper cut out the danger. However, lurking close by was Lee Maher and he crashed the ball past the keeper and narrow the gap. Substitute Cathal O’Shaughnessy then showed his talent firing a point from distance and with four minutes of normal time left to play the margin was back to four.
Abbeyleix were hurling well but the Harps replied with a superb point by James Duggan and when the Harps won the puck out they charged back down field where a well placed ball fell kindly for man of the match Conor Delaney. He crowned a great display with the game’s fourth goal.
Although Lawson Obular replied with a point time ran out and the Harps were deserving winners of a first title at this level, some consolation for a narrow defeat 12 months ago.
Abbeyleix were shattered but even with a full deck it’s doubtful if they would have claimed the crown. Hurling for fifteen minutes with 14 in heavy conditions took its toll. Now they have little time to rest as many of the same players line out in next Sunday’s under-17 football equivalent against Courtwood-Emo.
Conor Delaney was the deserving of the player of the match and team captain Jim Duggan received the winner’s trophy from County Board vice-chairman Tom Clear who paid tribute to two hard working teams in difficult circumstances.