Children aged from five to 16 and their ponies took part in displays of show jumping, cross-country, showing and games as well as a fun round of ‘Chase me Charlie’ pairs.

The day’s fun began at 10am. All of the age categories put their skills into, with rosettes, prizes and inaugural trophies presented to some very happy children.

The day finished off with some ‘Chase me Charlie’ pairs. This involved an older child teaming up with a younger one and they jump higher and higher. The pairing gives the younger children confidence to try a height they haven’t previously attempted. 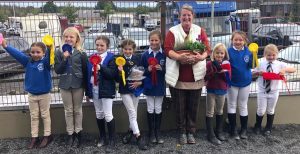 Some of the members of the Laois Hunt Pony Club proudly display their wining rosettes pictured alongside club instructor and judge on the day of the clubs annual end of year show, Ellen Bolger

The pony club’s district commissioner Thomas Murphy said: “We were only delighted to see so many of our dedicated riders, parents and volunteers turn out. We have had a very busy year, lots of new members and lots of children competing at area, national and international competitions. We are very proud of the achievements made by every single member – from coming off lead rein to representing Ireland. I really believe that if the children set a goal and spend time working towards it, they build confidence and they understand that hard work gets results.”

Warren Schofield from the Laois Hunt Pony Club said: “We are always encouraging young people to come along to training. We would recommend anyone who thinks they want to try games to get in touch with the club to have a chat about what is involved.”

Newly-appointed assistant district commissioner Sarah Phelan said: “The best part of the day was seeing the children have such good fun; the friendships that are formed at the club are like no other. They cheer each other on when they are going well and they support one another when the nerves kick in. To see the young members overcome their personal milestones is something really special.”

While the club members might have celebrated their end-of-year show, they have a few more to go before the end of the year, most notably a Christmas show at the end of December.
Mr Murphy said: “We would be only too delighted to have anyone come along to a rally to see what is involved. Pony club membership is great value. It gives children the opportunity to develop their riding skills in a fun environment. We are also very lucky to have the amazing Stradbally Hall as our home ground for training and the venue for our annual summer pony camp and one-day event. The Laois Hunt Pony Club has something for all levels across all disciplines, while also covering the important elements of stable management and horsemanship skills. These are measured with achievement badges, which brings the children back every year to keep progressing.”