A WELL-KNOWN Portlaoise man who set out to raise €200 for Pieta House from a coffee morning said that he was ecstatic after massively exceeding his target.

Thomas ‘Tucker’ Lynch, who suffers from anxiety and depression, wanted to give something back to Pieta House for supporting him over the past few years.

His goal was to raise €200 by organising a coffee morning in Portlaoise Parish Centre.

With the support of his father Michael, along with his aunt Esther and some of his friends, they approached local businesses to see if they would supply provisions for the event. Thomas said that he was surprised by the amount of support he received from local businesses such as Willie Kerry (Party and Gifts), Mulhall’s SuperValu, CoCo’s Superstore, The Sweet and Cake Shop, McCormack’s Deli, Brown’s Gala, Dublin Road, Dunnes Stores and The Office Centre. 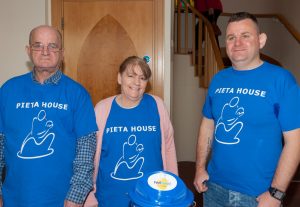 “I’d like to thank those both near and far who supported me in the past few weeks and also to those who helped me on the morning of the event, especially my father and aunt,” said Thomas.

“I’d like to thank those who would have liked to have come, but due to work commitments couldn’t but who supported me in other ways, and also thanks to Declan Kelly and the staff at the parish centre for all their assistance. I also want to send my appreciation to all the businesses in the town who supported my effort,” he added.

Thomas said that while the morning was advertised as a fundraiser, it also publicised difficulties people with mental health issues face and how Pieta House can help.

“I feel that organising the coffee morning has made me a lot stronger and has given me a more positive outlook on life. I stood up when it counted to try and break the stigma surrounding mental health.

“I feel that the coffee morning was a great success, with so many turning up and supporting it. I am delighted that the event managed to surpass my target and went on to raise €551.20, which will be used by Pieta House to keep their vital service going and help those who need it with mental health issues,” concluded Thomas.