THE Killeshin Hotel was bustling with food lovers at the recent Welcome to Taste event. Guests Darina Allen, chef Andrew Rudd and local producers celebrated Laois food with an audience of 200 people. The event was held to officially launch Laois Taste, which was set up to develop the produce of its 22 members.

The evening opened with a warm welcome from Laois Taste chairperson Helen Gee, who informed the crowd that the event was all about Laois food and drink producers as well as discovering some of the produce sold across the county.

Ms Gee then invited Laois County Council chief executive John Mulholland to officially launch Laois Taste. The local authority boss praised the efforts to develop and support Laois food and drink and emphasised the crucial role the new brand will play in promoting the food and drink and tourism sectors. 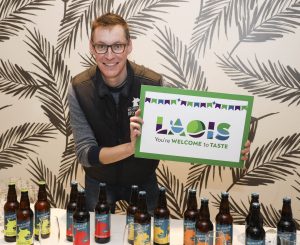 Darina Allen followed, telling the audience about her experiences in Laois, which began her lifelong passion for food. She told them how delighted she was to see Laois producers showcasing their produce and talked about what makes Laois food so unique.

Ballintubbert chef Andrew Rudd then gave an exciting cooking demonstration, using local produce to create different meals. The menu consisted of a starter, salad, main course and dessert, each described as simple but very tasty. Andrew interacted with his audience while he worked, offering samples to guests and allowing the producers to talk about the ingredients he was using.

After the demonstration, guests moved to the buffet area, which gave them a chance to talk to Laois Taste members and ask about their produce. Darina Allen was also available to sign her new book.

A raffle took place on the night, too, giving guests an opportunity to win a free signed copy of Darina’s One pot feeds all, or Andrew Rudd’s cookbook. The star prize was a free place in one of Darina’s courses at Ballymaloe Cookery School. Commending the fantastic event that was put together by the Laois Taste group, Darina quipped: “Cork better watch out”.