WORK is almost complete on the preservation of Killabban Monastery and grounds, whose rich history stretches back more than 1,400 years.

Expert stonemasons have erected scaffolding on part of the monastic structure, as restoration work continues at the important heritage site.

Stonemasons from Tallis & Co in Freshford, Co Kilkenny erected scaffolding on the north gable and the north side of the nave, so that work could be completed on clearing vegetation and re-pointing stonework with lime mortar. The original wooden structure was replaced in the 13th century and some alterations were made in the 16th century.

According to the Killabban Monastery Restoration Committee, work was carried out to the strictest conservation standards under engineer David Kelly and archaeologist Colm Flynn. It will result in the conservation of the Killabban ruins into the future, as a link to the monastic past of the area. 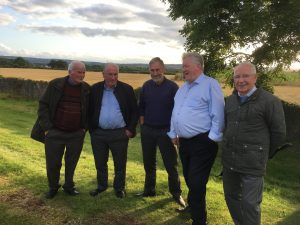 Since 2012, a cemetery Mass has been celebrated annually at the site, where founder St Abban was buried in the seventh century. At the 2019 annual cemetery Mass, celebrant Fr Pádraig Shelley, PP, praised the committee on their hard work preparing the grounds and graveyard over the summer, in order to celebrate the lives of all those buried there, from St Abban in 650AD to the last burial in 1980.

Fr Shelley talked of the work of St Abban and the humble life both he and his followers would have led. After Mass, Fr Shelley blessed the graves and all who are laid to rest there.

The work on the monastery is supported by Laois County Council and the Heritage Council of Ireland, with Laois Heritage Officer Catherine Casey giving the project her unwavering support.

St Abban was a follower of St Fiachra, who had a monastery in Sleatty, located between Graiguecullen and Knockbeg College. Killabban Monastery was established by St Abban about 640AD. As the monastery and surrounding town grew in size, he   travelled throughout Leinster setting up monasteries in his name. He founded one in Adamstown, Co Wexford, which grew to equal the size of Killabban. He also sent one of his monks, known as St Evin, to establish a monastery where Moore Abbey stands today in the town of Monasterevin.

St Abban is said to have been descended from a noble race of Leinster men. His father Cormasus was king of the Leinster men and his mother Mella was sister of the bishop of Ibar.

According to legend, when St Abban died, the monks of Killabban and Adamstown decided to fight a battle near Graignamanagh and the winners would bury his body in their own monastery.

The battle was never fought, as monks from Graignamanagh got two coffins, put the saint’s body in one and an equal weight in the other. Having sealed the coffins, they gave one to each group and sent them home to bury their coffin. In this way, neither group would know if they had the actual body.

With much of the preservation work at Killabban now complete, the committee will hold its AGM soon in conjunction with Laois County Council and the Heritage Council. The AGM will discuss the future direction of the Killabban Monastery Restoration Committee in continuing the preservation and promotion of valued heritage in the area.