TWO exceptional groups in Laois are celebrating national awards worth €10,000 each for their extraordinary work in the county.

The Cuisle Cancer Support Centre in Portlaoise and the Abbeyleix Bog Project won their respective categories in the National Lottery Good Causes Awards at the weekend.

It was an outstanding result for a small county, as Laois won two of the seven available categories. The Cuisle Centre received the Health and Wellbeing Award, while the Abbeyleix project won the Heritage Award. 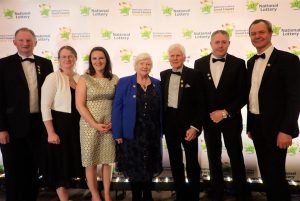 Representatives of both Laois groups stepped out in style at the glamorous gala awards ceremony on Saturday night in the Clayton Hotel, Dublin, which recognised their inspirational work and achievements. Both Laois groups were up against six other finalists from all over the country in their respective categories.

The voluntary and community-led Abbeyleix project is a nationally renowned   conservation reserve, whose 200-hectare natural heritage area is home to an amazing variety of flora and fauna.

The Cuisle Centre is also renowned for its sterling support of cancer patients and their families all over the county, as it offers services ranging from counselling and holistic therapies to support groups and nutritional advice. Founded in 2004, the centre is funded mainly by voluntary donations and fundraising events organised by the public.

Meanwhile, Laois Sports Partnership was nominated in the sport and recreation category but lost out to Liquid Therapy in Donegal.