– with reporting from Dan Buckley, Eoin English, and Jessica Casey

There are calls for increased Garda resources to clamp down on violent attacks and crime in Cork city.

Armed gardaí as well as the force’s riot squad were deployed to Cork city centre last night after reports that a high-profile shop on St Patrick’s St was about to be robbed by a group of teenagers.

The Garda Public Order Unit, commonly known as the riot squad, along with a single armed support unit, were sent to patrol the streets of Cork City centre amid fears that a group of teenagers were about to go on the rampage.

There were also a number of gardaí on foot patrol.

Shortly after 6pm, a group of up to 100 teenagers with their faces covered could be seen running along St Patrick’s St after a notice was posted on Twitter by an unknown individual or group calling for a raid on JD Sports.

The message was circulated on social media advising people to gather outside McDonald’s on Winthrop St, off St Patrick’s St, at 5.30pm.

The message stated: “Dress code. You must wear all black with bally [balaclava] and gloves. You only have one minute to yam that shop. This is at your own risk. Don’t come if you can’t run.” 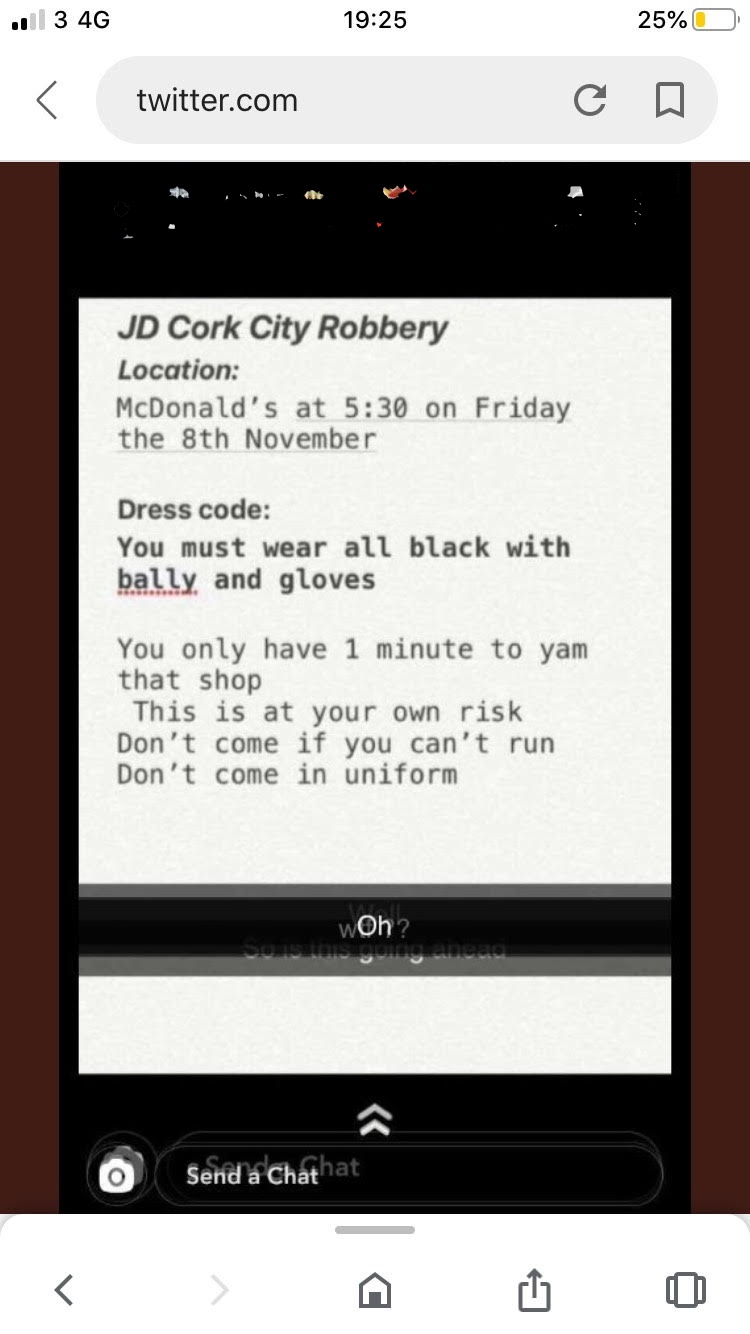 Local councillor Ken O’Flynn said it is the latest in a series of worrying incidents in the city.

“This is down to the lack of garda resources.”

Has added the people involved should also worry about themselves, saying they will get into trouble if caught.

A garda spokesperson today said that there had been no arrests following the incident.

Gardaí said last night they deployed additional resources to the area after being made aware of the potential for an incident.

Speaking last night, Labour councillor John Maher called for all those involved in the suspected pre-planned incident in Cork to face the full weight of the law.

It is believed the foiled incident may have been modelled on a gang raid of a JD Store in London on Halloween night last week which is being investigated by Scotland Yard.

A gang of masked and hooded youths looted a JD Sports store in north London, grabbing handfuls of branded clothing before fleeing the scene.