THE summer of 1969 was an eventful period. While many nations across the world set their gaze on the stars and patiently followed the efforts of three American astronauts as they attempted to set foot on the moon for the first time, back in Laois, and more specifically in the village of Ballylinan, the local people celebrated the opening of their new church.

To paraphrase the words of Neil Armstrong: ‘it was a small step for the diocese, but a giant leap for the people of Ballylinan!’

The existing St Anne’s church on the main street was set to close and become St Anne’s Hall and a new location was found to build a modern, new church. A site was kindly donated by the late Bridie Maher, and under the inspiration of parish priest Fr Michael Coughlan, architect Michael Crowe was commissioned to design a modern church reflecting contemporary architectural trends. The late Michael Regan from Killeshin set about bringing the plan to life and the building was completed in the summer of 1969. On 29 June 1969, St Anne’s Church was opened and blessed by Bishop Patrick Lennon. 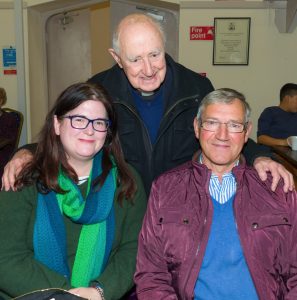 Fifty years have ticked by and St Anne’s church has become a constant backdrop in the lives of the people of Ballylinan: a place for couples to set out on their married lives together; a place for proud parents to welcome new family members in the sacrament of Baptism; a place to bid farewell to loved ones in solemn funeral Masses; a place just to gather each week to give thanks to God. It is a place which has many memories.

And so it was only fitting that the parishioners should mark the golden jubilee of their church. The recently-formed Ballylinan Pastoral Group (John Bambrick, Michael Sourke, Mary Byrne, Margaret Brennan, Kevin Hovenden, Anna Maria McHugh) set about overseeing the task, along with the current parish priest Fr Padraig Shelley. Like any building job, what started out as maybe adding a new stained glass window to mark the jubilee, led to other jobs. And so the list slowly grew to include the installation of a new ambo (raised platform), presidential chair and presider’s chair, concelebrants’ chairs in the sanctuary area; refronting of the original altar and tabernacle pedestal to match sanctuary furniture; a new carpet in the sanctuary; a new baptistery relocating the baptismal font to its own unique space; a new jubilee window to frame the baptistery depicting the Baptism of Our Lord; a new sound system in church; a new lighting system; the existing prayer room redecorated; the addition of a restored stained glass window of St Patrick (from the former St Anne’s Church) to occupy new prayer space and back lit to aid display; and finally, the church was given a new coat of paint.

The combined works add greatly to renewing the fabric of the church. But maybe the two mostly notable additions are the new jubilee window and the restoration of the old stained glass window from the former church. They now sit side by side in the building – one a testament to the kindness and generous support of the people who live in Ballylinan today; the other, dating back to 1932, speaks of the goodness of past generations and their devotion to their local church.

On Sunday 20 October, Bishop of Kildare and Leighlin Denis Nulty led the golden jubilee Mass, assisted by Fr Padraig Shelley, PP, Fr Thomas O’Shea, PE, Fr John Stapleton, PP, Killeigh (and nephew of Fr Michael Coughlan). Two new choirs, the Jubilee Choir and the Confirmandi Choir (consisting of children from the local Confirmation classes), sang at the mass. The four altar servers from 1969 (Ted Farrell, Joe Dineen, Declan Mulhare and Leo Farrell) led the Prayers of the Faithful. The first two couples married in the church, Eddie Dunne, representing his late wife Brenda, along with Ann and Michael Sourke, brought the offertory gifts to the altar. A ciborium donated by the builder (Michael Regan) was used in the Mass. After Mass, the congregation enjoyed tea and refreshments in St Anne’s Hall, organised by the Ballylinan Community Council and Hall Committee.

Laois marks 11th day with no rise in Covid-19