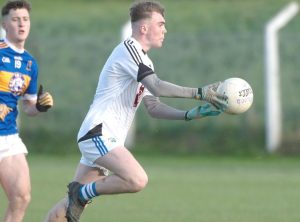 COURTWOOD/EMO are into the U/20 football final after a resounding victory over neighbours O’Dempsey’s in Portarlington on Saturday afternoon.
Courtwood/Emo were brilliant all over the park and never afforded O’Dempsey’s any opportunity to get any sort of momentum gping in the match. Courtwood/Emo’s passing ability and also their runs off the ball were immense in the creation of scores.
Courtwood/Emo started well scoring the first three points. Jack Owens and Alan Kinsella both converted frees before Paddy Hosey fired over from play. O’Dempsey’s got the scoreboard ticking as Laois U/2 star Mark Barry pointed a free in the 10th minute.
Thomas Scully, Paul O’Flynn and Kinsella were providing problems for the O’Dempsey’s defence as they scored three points in succession, all of them getting one point from play.
O’Dempsey’s were struggling to handle the attacking threat of Courtwood/Emo. However, Barry and Sam Molly pointed for O’Dempsey’s to leave three points between the sides approachng the half time break.
The men from Killenard had made many attempts to score but Courtwood/Emo’s experienced players were able to soak up the pressure they were under.
Kinsella pointed again followed by a point from Niall Dunne from play. Courtwood/Emo then got in for their first of four goals just before the half-time whistle. Hosey fired the ball to the net beyond the despairing grasp of David Nicholson.
The goal spurred Courtwood/Emo on and they raised another green flag shortly after Rory Doyle unleashing an unstoppable strike into the top corner off the underside of the crossbar. Owens pointed twice before half time along with a point from O’Dempsey’s Barry Howlin.
That scoring spree saw Courtwood/Emo go into the break with a commanding 13-point lead.
They then got in for a third goal right after the beginning restart when Kinsella found the back of the net. Hosey also pointed following the goal. Doyle then turned provider as he set up Jack Owens to blast home.
Courtwood/Emo went on to score five points without reply as Hosey, Rory Doyle, Cian Doyle, Owens and Matthew Byron all split the posts for their side.
O’Dempsey’s didn’t score until the 14th minute of the half when Howlin split the posts. Barry got another two points, one from a free before Ben Slevin found the back of the Courtwood/Emo net but it was all too late for a comeback.
Portlaoise and Portarlington will battle it out tomorrow (Wednesday) night to decide who will meet Courtwood-Emo in the final.