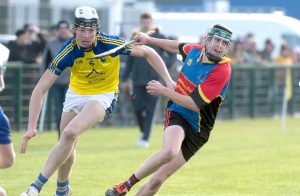 LAST year Raheen were denied a semi-final place in controversial circumstances but this year they have improved with each outing. Although they had a tough encounter five days earlier they came out full of determination at the Centre of Excellence on Sunday facing last year’s beaten semi-finalists who would have been slight favourites.
On a cold but dry day Abbeyleix got the perfect start when defender Louis Churchouse delivered a huge ball out of defence. The RPG keeper misjudged and the ball nestled in the back of the net.
The Gaels had not even warmed up but hit back with points by Rob Delaney and PJ Daly with Abbeyleix responding with points from Cian O’Shaughnessy and Colm Walsh.
Pat Hosey and Paudi McDonald fired over points and another from Conor Madden saw Raheen edge in front. Daly and Walsh exchanged points and the Gaels were taking control entering the second quarter.
Dylan Cuddy then sidestepped his marker and lashed low and hard past the Abbeyleix keeper five minutes before the break but Ciaran Byrne and Fionn O’Mahoney clawed back two points.
However, on the call of half time the Gaels struck for the game’s third goal. Nathan Dunne won possession, off loaded to McDonald who gave the keeper no chance and at the interval the Gaels led 2-12 to 1-8.
Abbeyleix, after making two changes, began to hurl much better, After Pat Hosey pointed from play Diarmuid Whelan opened the Abbeyleix account and the Gaels were conceded frees. The next four points came from the deadly accurate Fionn O’Mahoney and the margin was back to three. Pat Hosey lifted the siege with a free but Fionn Mahoney did likewise heading into the final quarter.
Then the Shinty man James Keyes showed his qualities firing over two great points to calm the Gaels. Abbeyleix had not gone away and hit two great points from Gearoid Lynch and Ciaran Byrne and with six minutes remaining the margin was back to three.
Would the midweek game take its toll or could the Gaels hang on and they did and with a swagger swinging over three unanswered points by Hosey, Brennan and Daly to send Raheen through to their first final in the grade.
The Gaels have now seen off three senior clubs to reach the Holy Grail and will not fear the champions when they meet.