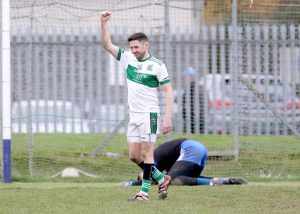 FOLLOWING 60 minutes of back-and-forth football, and a further 20 minutes of dramatic extra-time and a melodramatic penalty shoot-out Portlaoise eventually got the better of Wicklow champions St Patrick’s in a thrilling Leinster quarter-final on Sunday afternoon.
The two sides were kept locked together through an enthralling clash in Aughrim, so much so that not even Paul O’Brien’s dramatic goal in extra-time was enough to put the game to bed.
Instead, it was left up to Craig Rogers to finally bring the contest to a close, with the Portlaoise man netting the game-winning penalty after Tommy Kelly had seen his spot-kick for Pat’s sail over the bar.
It was seven years ago when St. Pat’s met Portlaoise at the same stage of the same competition. The result on that day was far from that which would come out of Aughrim on Sunday; Portlaoise thrashing Pat’s 3-15 to 0-4.
While Portlaoise would start proceedings the better – Ricky Maher and Conor Boyle putting them two points to no score in front early on – Pat’s would issue the first shot across the bow through Stephen Duffy.
After spreading possession back-and-forth across the face of the Portlaoise defence, Paul O’Brien took it upon himself to move the ball onto Duffy, who touched it past his marker before firing the ball into the left-hand corner of Michael Nolan’s goal.
Pat’s would consolidate their early advantage through the boots of Matthew Traynor and John Crowe. Despite this lead, Pat’s were being made to work extremely hard at the back to keep Portlaoise at bay, with Conor Ffrench and Niall Donnelly putting in gladiatorial performances to that end.
Kieran Lillis would reduce the arrears to just a single point, only for Tommy Kelly to point on the turn to give the men from Wicklow a two-point lead at the break.
The second-half would be a real struggle for Pat’s, as Portlaoise came out from the break with all guns blazing. Ciarán and Wayne Doyle were both shown yellow cards for separate incidents as the visitors piled the pressure on the Pat’s rearguard.
Their end product, however, would prove quite poor at times. Brian Glynn, Chris Finn, and Kieran Lillis all shot wide when opportunities presented themselves.
Brian McCormack would bring the gap back to the minimum, only for Bryan Doyle to reaffirm Pat’s advantage with a strike from wide on the left.
That score forced Portlaoise into quite an unexpected substitution, as Graham Brody was brought on for goalkeeper Michael Nolan. Brody, who has not featured for Portlaoise all though the championship campaign, spent the majority of his time on the pitch making marauding runs into St Pat’s territory both on and off the ball.
With 15 minutes of the half elapsed, frustration was starting to set in for the Laois champions who had Brian McCormack dismissed by way of a black card for a late tackle on Paul O’Brien.
To their credit, despite the numerous setbacks that they endured and the frustration they faced up against a well-drilled, disciplined Pat’s outfit, Portlaoise never looked beaten. As the clock ticked into the final ten minutes, Benny Carroll brought the teams to within a point, before Conor Boyle had the chance to surely win the game, only for him to see his guilt-edged chance for a goal go wide.
They brushed off that missed opportunity to send the game to extra-time, with the excellent Kieran Lillis notching the equalising score. 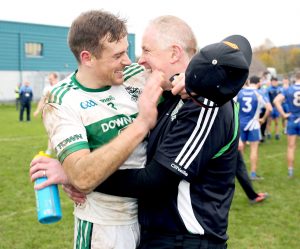 Kieran Lillis knocks off Niall Rigney’s cap in the celebrations after the dramatic defeat of St Patrick’s Photo: Dave Barrett

Just a minute into the additional 20 minutes, Portlaoise saw themselves in front for the first time since those early first-half scores, as Ronan McEvoy, brought in for the black-carded McCormack, splitting the posts. This lead would be short-lived, however, as Stephen Duffy curved the ball between the posts to bring the sides level again.
Two minutes later, and Pat’s were once again in front, in most dramatic fashion. A speculative high ball was dropped into the Portlaoise square by Tommy Kelly. Graham Brody, who hadn’t had much in the way of traditional goalkeeping work to deal with, flapped at the ball, allowing Paul O’Brien to gather possession and roll the ball into the net. Once again, the sense of optimism that this would be the Pat’s team to finally make it out of the provincial quarter-finals re-emerged.
Portlaoise substitute Paul Cahillane would close the gap to within two points the extra time half-time interval to bring his side right back into it once again.
On the restart Kieran Lillis turned the game on its head with a goal, despite the best efforts of the Pat’s defence on the goal-line. Pat’s were suddenly facing defeat, only for Matthew Traynor to register a score as the enthralling, nerve-wrecking encounter was sent to penalty kicks.
Tommy Kelly, who had acted as the Wicklow Town team’s perennial talisman all season, was first to step up to the podium, only to see his spot-kick sail over the bar. Conor Boyle would make no such mistake to give Portlaoise the lead. Jonathan Delahunt, Padraig Higgins, and Patrick McWalter were all successful for Pat’s, while Ricky Maher, Ronan McEvoy, and goalkeeper Graham Brody all buried their efforts into the corners.
Stephen Duffy squeezed his kick past the stretching Graham Brody to keep his team’s hopes alive, but it would be for nothing. Craig Rogers stroked the ball into the bottom right-hand corner of the goal, past the despairing dive of Shane Doyle to send Portlaoise through to the semi-finals of the Leinster Club Football Championship where they will meet their neighbours from Carlow, Eire Óg.