The story of Laois footballer’s triumphant USA tour in 1938 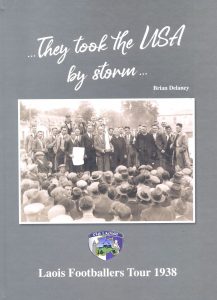 THE deeds of the Laois footballers who travelled to New York in 1938 have been chronicled in a superb book by Brian Delaney, Portlaoise which was launched by former Knockbeg, Graiguecullen and Laois footballer Mick Fennell in the Graiguecullen GAA clubhouse recently.
In 1938, All-Ireland champions Kerry and beaten finalists, Ulster champions Cavan, were invited to New York but Kerry were unable to fulfil that invitation and, in their stead, nominated Laois.
The Laois party left Cobh on Saturday 7 May on the SS Manhattan and arrived in New York on Friday 13 May. That date might have been regarded as a bad omen but, as things turned out, any feelings superstitions were mislaid.
During their 26-day stay Laois played five games and were unbeaten. The first game against Cavan was drawn but the O’Moore County were clear winners of the second game. Laois also defeated New York twice, the second time in an exhibition game while there were also victories over Philadelphia and Boston.
For their victory over Cavan, the magnificent International Trophy, sponsored by whiskey distillers John Jameson, was presented to winning captain Jack Delaney of Stradbally. Jack is father of the book’s author, Brian. The Tommy Heeney Cup was presented to Jack for the 7 June 1938 defeat of New York. Heeney was a Longford native, an Irish emigrant to the Big Apple.
The Laois contingent stayed a week longer than intended due to the drawn game and started their journey home on board the President Harding on 8 June, arriving back in Cobh on June 15.
Brian Delaney had heard a lot about the Laois team of 1938 travelling to the States and over the past two years carried out extensive research on the subject, resulting in the publication which is titled simply: ‘They Took the USA by Storm’, with the subtitle ‘Laois Footballers Tour 1938’.
The tour had Laois in fine fettle for the Leinster championship and they duly defeated Kildare in the provincial final on a score of 2-8 to 1-2 before falling to Kerry in the All-Ireland semi-final by 2-6 to 2-4.
Stradbally and Graiguecullen players dominated the Laois team which made the trip across the broad Atlantic.
The seven Graigue players were: Tommy Murphy, Mick Haughney, John (Mallet) McDarby, Jim Slater, Jim (Rexie) McDonald, Ned Begley and goalkeeper Mick (Buxie) Farrell.
There were also three Army Metro players and one from Garda on the team panel.
Brian Delaney’s book features a front page photo of the Laois group on their return to the county, with his father Jack in possession of the magnificent International Trophy. The photo was taken in the Court Square, Stradbally.
There was a Graiguecullen connection to that Laois homecoming of 81 years ago. Noel Alcock from Staunton Avenue, Graiguecullen, was present when the heroes returned. Noel attended Saturday’s book launch and made a presentation on behalf of the Graiguecullen club to Brian Delaney.
Mick Bolton, Graiguecullen treasurer and club stalwart, showed me an admission ticket for a game played between Laois and Carlow footballers in Dr Cullen Park on Sunday, 27 April 1947. The game was a fundraiser for the dependants of Mick (Buxie) Farrell, who died less than nine years after the American trip.
In launching the book, Mick Fennell especially welcomed the families and friends of the great men from Graiguecullen and Stradbally clubs remembered in the book.
Mick told his audience that Graigue’s ‘Magnificent Seven’ on that Laois team “were regarded as the very best of their generation”.
They were held in the highest esteem by the people of Graiguecullen, throughout Laois and Leinster. They were regarded as pillars of society, men to be looked up to.
“The people of Graiguecullen felt they owned them and refused to let them stop playing. John McDarby played until he was 55 and the other men also played until their legs caved in.”
It was an honour and privilege to have known these men, who are remembered for having such a positive influence on people’s lives.
“As the families and friends of these great players I say to you, hold your heads high and always be so proud of them, for what they achieved for this club, Laois and Leinster.”
Brian Delaney described of having come across a history of the 1938 Laois tour through the fact that Lar Brady, then chairman of Laois GAA County Board, kept a detailed daily diary of the events.
Brian’s interest in the 1938 tour was piqued and he obtained photos from the trip and sought more through the local newspapers.
Brian expressed the hope that his book will bring back to life the fabulous Laois footballers of the 1938.
George Nolan, Graiguecullen GAA club president and who, like Mick Fennell, provided a link to the last Graiguecullen team to win the Laois SFC in 1965, brought forward some remarkable statistics in his address.
He said that from 1927, when Graigue entered the Laois championship, to 1949, there were 23 county finals. Twelve of these deciders were between Graiguecullen and Stradbally. And 10 others included either Graigue or Stradbally.
These stats demonstrated the influenced of both clubs in Laois domestic football during that era.
At Railway Cup level, the competition next in importance to the All-Ireland, nine Laois footballers were picked for Leinster in 1938 and seven from the O’Moore County in 1939.
Laois county board chairman Peter O’Neill complimented Brian – who won Laois SFC medals as a half forward with Portlaoise in the 1960s – on his work and dedication in compiling the book.
Michael Lawler, Graiguecullen GAA club chairman, was a very capable MC on the night.
The book is selling for €20 with all profits going to charity.