Early goals provide the foundation as Camross claim under-20 crown

The Camross team and management celebrate their U/20 Hurling Championship final win at O’Moore Park on Saturday Photo: Denis Byrne

REIGNING champions at under-21 level, Camross, took their first title at under-20 level on Saturday in O’Moore Park. The score line indicates a comfortable victory, and it was, and it might have been more one sided had the winners not conceded unnecessary frees in the second half. On the other hand, had they continued their scoring ratio of the opening quarter then it might have been a landslide.
Great credit is due to the Gaels who, after an early battering, settled down and hurled very well. However, the concession of three early goals proved just too much to overcome. That said, in the middle third they played some excellent hurling.
A small crowd packed into the stand in good but cold conditions. The two teams had racked up big totals in qualifying rounds and once Eoin Gaughan put Camross in front from a free in the first minute they were in the driving seat. The next score confirmed that.
Camross won possession and full forward Oisin Bennett raced past the Gaels’ defence to hammer the ball beyond Darragh Hiney. Gaughan and James Keyes traded points before Pat Hosey added a second point for the Gaels.
Keyes converted a free in the 11th minute reducing the deficit to four but then in the space of two minutes Camross struck for two goals. The first came from Oisin Bennett and he then fed Odhran Phelan for his side’s third and the game was only 14 minutes old.
At this juncture it looked all over but the Gaels responded with a brace of points by James Keyes but Camross responded with a brace each by Dan Delaney and Eoin Gaughan.
But the closing scores a point by Pat Hosey and a goal from a penalty by James Keyes gave the scoreboard a better looking perspective altogether Raheen Gaels 1-7 Camross 3-9. 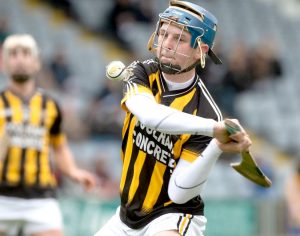 Robert Delaney about to play the ball in the U-20 hurling championship final Photo: Denis Byrne

In the dressing room Camross were wondering how they only led by eight and Raheen mentors would have been the happier after shaving four points off the deficit in the final two minutes.
The early stages of the new half would be crucial and when Conor Madden and James Keyes added two early points it was looking good although Rob Tyrell had got the opening score inside a minute being played in by Tomas Keyes.
Oisin Bennett added a second Camross point and although James Keyes replied again the Gaels were over dependent on him and Cian Delaney wearing four pointed for Camross. Niall Bennett traded points with Dylan Cuddy and a huge point by Dan Delaney saw Camross in front by nine points going into the final quarter.
The Keyes cousins traded points but two more points in as many minutes extended the Camross advantage to 10 points and there was no way back for the Gaels although they tried desperately hard emptying their bench and the excellent James Keyes that fired over three in quick succession.
Camross also emptied their bench but an exquisite point by Rob Tyrell was to be the game’s last action.
In the conditions this was an entertaining game and while the Gaels continued their impressive form they never recovered from the concession of the early goals. Camross have added another title their 19th and having already collected the intermediate crown they will be pleased as they plan on regaining the senior crown.
Rob Tyrell was the official man of the match but there were several contenders including James Keyes who was outstanding for the losers.