THERE was heartbreak for Rathdowney/Errill in Netwatch Cullen Park when they were pipped on the line by St Mullins. With extra time looming man of the match James Doyle ghosted through the Laois champion’s defence and land the dubious winner.
This was after a cracking game in which Rathdowney/Errill and St Mullins locked horns in a great advertisement for the game of hurling. Neither side gave an inch but all in a true sporting manner.
And while the result could have gone either way few could complain at the outcome. The Carlow champions always looked that bit sharper and in truth could have had at least another three goals if it were not for the heroics of goalkeeper Damien Madden.
In fact the netminder was the first Rathdowney/Errill player to touch the sliotar when he had to make a point blank save to deny Jason O’Neill with less that 30 second on the clock. However, Marty Kavanagh converted a free given in the build up.
Rathdowney/Errill replied soon after when Mark Kavanagh opened his account from a free after his initial effort from play rebounded off the upright and Brandon McGinley was fouled in the follow up play.
Minutes later James Ryan was denied by the St Mullins keeper Kevin Kehoe at the expense of a 65 which Mark Kavanagh duly converted. Mark Kavanagh and James Doyle went on to trade points before we had the first goal of the game.
Rathdowney/Errill centre back Jake Kelly picked out Paddy Purcell on the half-way line. Purcell took off on one of his trademark runs leave all challengers in his wake before unleashing an unstoppable shot from the 20 metre line.
But before the cheers had died down St Mullins stormed forward, Marty Kavanagh places Paddy Boland to blast beneath Madden for a goal.
James Ryan pushed the difference to two points wit a superb strike from out close to the left-hand sideline.
While the two Kavanaghs continued with their personal dual St Mullins full forward James Doyle was causing havoc in the Rathdowney/Errill defence. In particular it was his ability to snatch the ball out of the air that enabled him to create chances for himself and those around him.
Madden brought off another great save to deny Doyle before the two sharpshooters swapped a brace apiece, Mark’s second a beauty from play from out under the stand. Rathdowney/Errill’s next point was equally impressive when Ross King, who had been having a quiet game, split the posts from out wide on the left.
And when Jack Kelly found the target with a long range effort in the 24th minute Rathdowney/Errill had a four point lead.
But within seconds that gap was back to the minimum when Marty Kavanagh raced through the Rathdowney/Errill unchallenged to score his side’s second goal. A minute later an excellent points from Jason O’Neill had the sides locked together.
Mark Kavanagh’s sixth point, from play, edged his side back in front but only briefly as namesake Marty did likewise at the other end from a place ball.
A massive free from deep inside his own half by Mark Kavanagh ensured Rathdowney/Errill went into the break leading, albeit by just a single point, 1-10 to 2-6. 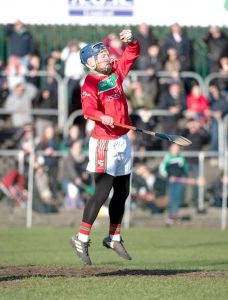 No doubt Rathdowney/Errill would have been happy to be leading at the break but would realise they had been a tad fortunate the opening half hour. St Mullins had shot seven wides, had been denied at least two certain goals by Damien Madden but all the while were finding it very easy to ghost through the Laois champions’ defence.
The fear was that if St Mullins improved their accuracy Rathdowney/Errill could be in trouble, and it looked ominous in the opening minutes of the new half. James Doyle pointed within seconds of the restart, with Seamus Murphy doing likewise soon after to put the Carlow side in front, briefly as Paddy McCane raised a white flag.
The rest of this enthralling encounter was go nip and tuck but you always had the feeling that St Mullins were finding it the easier to score, Rathdowney/Errill had to battle for their scores.
Marty Kavanagh and Doyle put two between the sides and that was how it remained 39 minutes in after Mark Kavanagh and Murphy swapped points. It was back to the minimum once again when Paddy Purcell landed a great point while under pressure.
And not for the first time St Mullins looked set for a goal when Mary Kavanagh burst through the middle only to see Brian Campion make a very brave block.
With Mark and Marty Kavanagh equally sharing the next six points scored it was still a one-point game with 51 minutes on the clock.
When Mark Kavanagh split the posts for an outrageous point from on on the terrace side to level the game the Rathdowney/Errill supports were in full voice, but only briefly as Marty Kavanagh converted yet another free almost immediately after to restore St Mullins one-point lead.
With less that three minutes remaining Ross King found the target from out in the middle of the field to level the game yet again. A minute later Rathdowney/Errill looked to have maybe ridden out the St Mullins storm when substitute Shane Madden regained the lead in the 58th minute. This feeling was heightened when the normally reliable Marty Kavanagh was wide from a long range free, but there was still time for a cruel ending for Rathdowney/Errill.
On the hour mark James Dole displayed great skill to catch a long delivery, turn and split the posts to level again.
With half of the two minutes of added time indicated Doyle gather Ger Coady’s sideline cut, rounded his marker, flicked the sliotar over another defender’s head before popping over the winning point. The only issue was that Doyle had caught the sliotar three times a free out should have been awarded.
But such is life and Rathdowney/Errill made no complaint and like true heroes accepted the outcome. It may have been the end of the road for them and Laois hurling this year but 2019 will always e remembered as the year that a lot of pride was restored to Laois hurling.