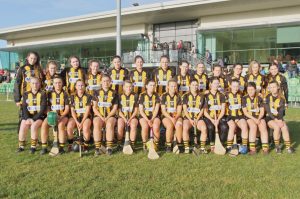 LAOIS versus Offaly clashes in any code are mainly fought with great intensity with the result in doubt until the final whistle. The recent club hurling clash between the respective county champions bucked that trend with the Laois champions coasting to victory but on Sunday last St Rynagh’s got revenge on a Laois championship winning team with a vengeance.
St Rynagh’s came into this game as warm favourites having breezed through Leinster 12 months ago. However, they lost the All-Ireland semi-final and instead of being promoted to senior they came back to defend their intermediate title after seeing off Shinrone in the Offaly and beating the Meath champions in the provincial semi-final.
Camross have been out of the province for some time but after two victories they were hopeful of at least being challengers in Ashbourne on Sunday. Instead they were brushed aside by a much more powerful St Rynagh’s team which might have scored more such was the hunger of their forwards.
The champions opened the scoring with a point by Siobhan Flannery from play but credit to Camross they responded with an equally well taken point by teenager Andrea Scully but unfortunately, from a Laois perspective, that was the only time the sides would be level.
The Offaly champions hit the next three points before Sarah Anne Fitzgerald converted a free in the eighth minute but from the puck out the ball was fed into the dual star Kate Kenny and she hammered high into the roof of the Camross net.
Much was spoken of the number 15, she had scored a goal and ten a week earlier helping the sister club St Kieran’s defeat the Cork team in the All-Ireland club football semi-final. She had only just begun and within two minutes had added another goal and a point.
Camross had the next attack but finished badly wide from a scoring angle. Full forward Siobhan Flannery added two points and after that Camross were under severe pressure particularly their defence. With every Offaly forward capable of scoring they went on to add another eight points without reply leaving the Laois champions trailing 0-2 to 2-15 at the interval.
Conditions at the Ashbourne venue were perfect for hurling but what Camross manager Fint Scully could say to his charges already prepared for another half of defending is debateable but they came back out determined to at least put some respectability on the scoreboard.
However, they would not score until midway through the half, Kirsten Keenan converting a free 30 metres from goal.
By then Kate Kenny had departed having added her third goal in the early minutes after the restart and having added two more points she was rested ahead of next Sunday’s All-Ireland club final.
Siobhan Flannery added points from play and placed balls and with the game in injury time Niamh Dollard brought off a good save only for her clearance to fall kindly for Louise Mannion and she hammered home goal number four.
Camross emptied their bench as did the reigning champions but it made little difference to the outcome. Camross had few players that will want to remember this outing but Lizzy Ryan, a one-time forward and now a defender, played her heart out. In the closing minutes she moved into attack to land her side’s last point.
No blame to the players, they were just outplayed by a far superior outfit who played camogie that would have matched anything that was witnessed in the senior final that followed between St Vincent’s of Dublin and the Wexford champions St Martins.