UP to 300 people packed into the local community centre for a very special fundraising venture, which was organised by Ballyfin Vintage and Veteran’s Club.

They were there to hear three people speak about their working lives and how they made their way to where they are today.

The well-known speakers were local man and star of Channel 4’s Supervet show Professor Noel Fitzpatrick; Anna May McHugh, head of the National Ploughing Association; and priest/author Fr Seán Hyland, who enthralled the audience with anecdotes about their fascinating lifestyles.

‘The Talk Show’ was facilitated by NPA chairman James Sutton, while entertainment was provided by locals musicians, singers and performers, including The Gilligan Brothers, Paddy Fitzpatrick and Eoin Fingleton. 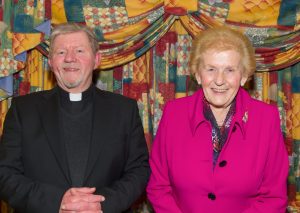 Vintage club vice-chairperson Majella Ffrench O’Connor said the event was a “resounding success. There was up to 300 people in the centre. They came from most counties from around the country.

“We thought we’d try and organise something different to raise funds for the club. We approached the speakers and without hesitation they agreed to take part. We also wanted to keep it as local as possible and received great support from the musicians who took part.”

Majella thanked everyone who attended, particularly the guest speakers and the MC, the musicians as well as the main sponsors Laois Hire, which supplied lighting for the car park, and Hughes’s Chemist, Portlaoise, who provided a hamper for the door prize. She also expressed her gratitude to her fellow committee members, particularly club chairperson Pat O’Connor for helping to organise the event.

Majella said that the night was a resounding success. She added that the club’s next event is the annual Christmas party in the Deadman’s Inn, Ballyfin on Saturday 30 November. Tickets are available by phoning Ger on 087 2530124.