A CRASH involving a runaway stag and a county councillor proved dear to the tune of €4,800.

Cllr Ollie Clooney’s vegetable van came a cropper near Abbeyleix when an adult male deer suddenly galloped across the road in front of him. He said: “It was a frightening experience. Luckily, I was able to swerve or the van would have turned over.”

The independent councillor, who runs a market vegetable stall, was driving from Abbeyleix to his home in Durrow at about 4pm when the accident occurred.  The forest-lined road is notorious for hazards posed by deer, particularly during the rutting season. 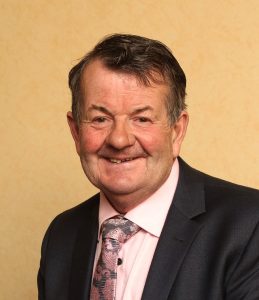 Cllr Clooney recalled: “I couldn’t avoid the stag and it got a bad belt from the van. Unfortunately, it died on the road.”

Despite the costly collision earlier this month, cllr Clooney stressed that he is not in favour of a deer cull in the area, despite rumours to the contrary. When he referred to the accident briefly during a council meeting last week, he said: “It cost me €4,800 since I was at the last meeting, when a deer hit my van. I don’t know do they need to be culled or what.”

When contacted after the council meeting, cllr Clooney said he would not support a deer cull in the heavily forested area around Abbeyleix, which is home to a wealth of wildlife.

He said: “I definitely didn’t intend to give that impression at the council meeting. It was just an unfortunate off-the-cuff remark. I don’t have anything against deer. They are very plentiful in the area now, but I would not be in favour of getting rid of any of them, despite the dangers. I just think we all have to be very careful on that road.”

Cllr Clooney briefly mentioned the crash during a debate at the latest Borris-in-Ossory/Mountmellick Municipal District meeting, after cllr Paddy Bracken called for ‘Deer Crossing’ warning signs to be erected on the R423 at Ballyfin, which he said was a huge issue for the community. District engineer Edmond Kenny confirmed that warning signs would be erected in Ballyfin.

The engineer also agreed to the installation of horse warning signs on a road in Shanderry, Coolrain, following a proposal from cllr James Kelly. The independent councillor described the area as the ‘Curragh of Laois’, where the Cooper family bred the 2018 Irish Grand National winner ‘Our Duke’.

Cllr Conor Bergin called for cattle crossing signs in Ballaghmore, where he said farmers are moving cattle as early as 4am because they are worried about meeting school traffic on roads later.