AND that’s a wrap. Well done to the pupils from Abbeyleix South National School, who won a major award for their film Breaking News.

The gong was presented to them at a star- studded ceremony in The Helix, Dublin.

Their film won the Best Mixed Media category at the FÍS Film Awards. 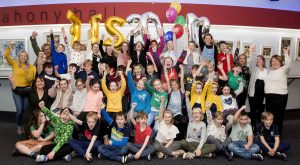 Pupils and teachers from Abbeyleix South National School celebrating their win at the FÍS Film Awards.

Breaking News is based on the novel James and the Giant Peach by Ronald Dahl, which the pupils had been studying in English class.

A spokesperson for the school said: “It was a wonderful experience for the pupils to be part of a film production. Thanks to Richard Reid, a parent in the school who ran the project and guided the children through the whole process of making this film. They all had an important role to play, both behind the scenes and on stage. The children learned so much about the process of filmmaking.

“We received the red carpet treatment upon arrival at The Helix. The award ceremony was filmed like a live TV broadcast. It was a wonderful and memorable day in the lives of pupils, teachers, SNAs and parents of Abbeyleix South National School.”